Bali was just so comfortable and easy that after Borneo we decided to return to Roam (the coliving space), for another couple weeks of new friends, great vegetarian food, cheap massage and lots of Zumba. Thanks to my scooter mishap, this turned into a lot more hospital time and a lot less Zumba than I originally planned, but it was still a good spot to recover and meet some more interesting people.

Throughout Bali, the housekeeping staff we have encountered have all been men. There were plenty of women in other roles – cooking, working reception – but men handled cleaning the rooms, washing the dishes, etc. (I have been told women also hold these jobs, but we stayed at 3 different hotels and never saw any.) I also noticed a number of local women working as house painters and lugging bricks to construction sites. I enjoyed the contrast to what I normally encountered in the US.

Most sidewalks and driveways had ornate designs. Decorative pavement costs the same as the plain, so most people opt for the ornate. It made even a short walk more lovely. 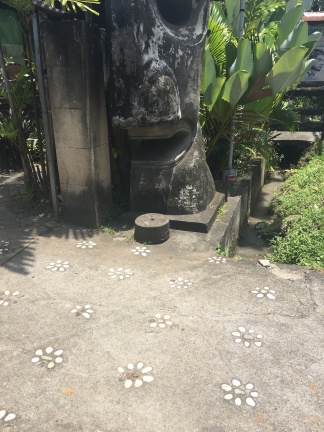 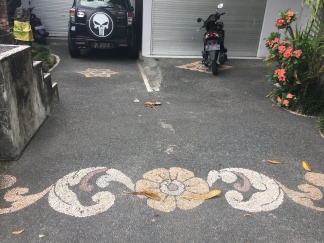 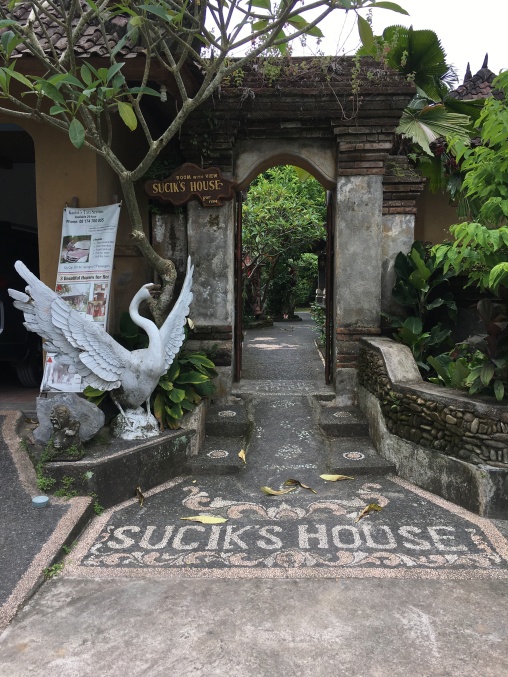 One of the main reasons we wanted to stay at Roam was the chance to meet so many different people. Just like last time, there was great diversity in age, background, passions, and country of origin.  I was particularly excited to discuss politics with someone from Russia, and hear more about life in Saudi Arabia.

It would be so easy to make incorrect assumptions about people from certain countries (or certain religions) based on the current news in the US. It was a good reminder to try and avoid making superficial judgements – even a casual chat with someone from a different background than my own quickly highlighted several similarities we share. (I hope I was similarly able to leave them with a positive impression of Americans, despite what the foreign press might be conveying.)

I think there would be a lot less fear if people took the time to get to know each other, even a little bit. This Danish video really sums it up beautifully…

Because of our unplanned extension, we managed to be in Bali for the new year celebrations which are designed to restore harmony between nature, man and the spirits. This is the biggest holiday on the island and spans for 6 days, inlcuding 24 hours of silence (for the whole island, enforced by the community police).

Prior to the day of silence, everyone on the island prepared to scare off all of the evil spirits. They constructed these large, intentionally ugly Ogoh Ogoh sculptures. Communities come together to create them for weeks ahead of time,  and you could tell they took great pride in their creations.

Once it grew dark, we headed to the starting route of the parade (which was thankfully only a 15 minute walk, given that I wasn’t terribly mobile). All the Ogoh Ogoh were lined up, with the local children excitedly waiting to carry them. 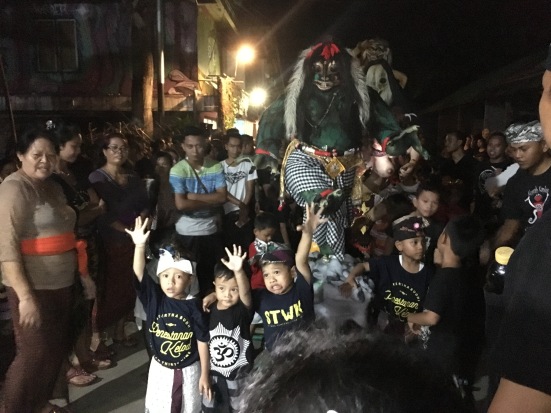 Adults were watching the perimieter to keep spectactors safe as they sent fireworks into the air, annoucing the start of the procession.  As the gongs picked up pace, the children worked together to lift these huge paper mache scultpures and start the parade. 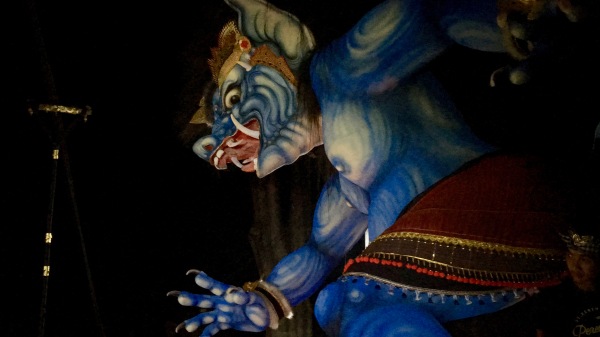 At various intersections they would shake or turn the Ogoh Ogoh, sometimes backing them down another street just to trick the evil spirits.  Some of the sculptures were so large that people had to use sticks to lift the power lines so the monsters could pass.

The procession takes a meandering route through town accompanied by lots of noise and fireworks before the sculptures are all set on fire, eradicating any evil influences on life. Though I wasn’t mobile enough to go the whole route, we continued to hear the sounds of fireworks for hours. 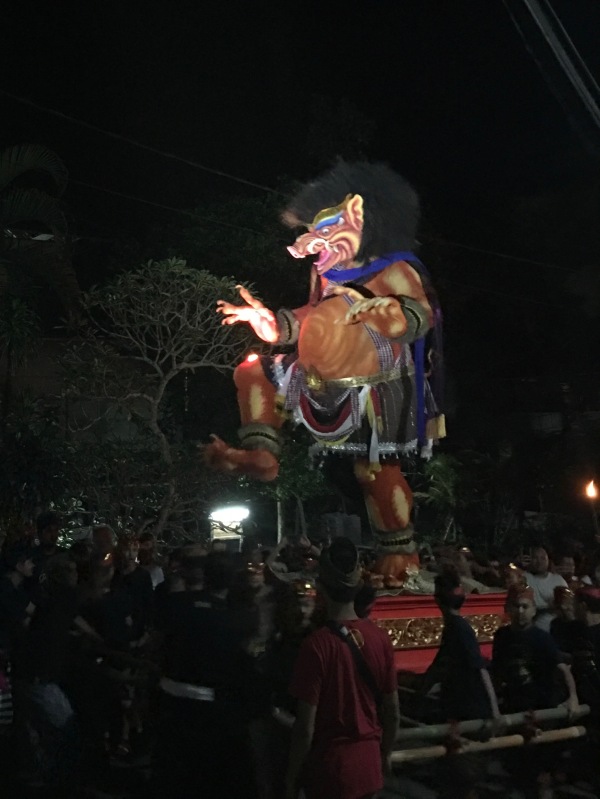 The next day was Nyepi, or Silent Day. It is intended to be a day of self-reflection and an opportunity for nature to have a respite after 364 days of human pestering. Absolutely no one is allowed in the streets except for community police and ambulances. The strictest observers avoided eating, using electricity, working and traveling. (Yes, even the airport was closed.)

As foreigners, we were not required to participate but we were also not permitted to disturb our neighbours. This meant we could use electricity (and wifi), but needed to make sure the curtains were closed in our rooms at night so we wouldn’t cast light onto the surrounding houses. We were allowed to cook our own food, but obviously all cafes were closed. And while we did talk, it was certainly quieter than usual, despite having all residents together for the day.

It was a gorgeous, clear day and the town was blissfully peaceful – chickens and dogs were the dominant noisemakers.  At night, the sky seemed like it was overflowing with stars since the town was so dark. It was a really nice break from all the noise and hustle of the normal days – I think it would be a great addition to all cultures, but it would really only work if everyone participated.

It’s been 10 days since the scooter wreck and I am a lot more mobile.  I’m still moving slowly as the cut on my knee and the road rash on my ankle are still healing, but all the stitches have been removed and I am thrilled that I no longer have a bandage on my face.

Given that the cherry blossoms have started to bloom, we are going to head directly to Japan now.  I am expecting it will be quite a shock to go from the small, lush town of Ubud to the modern metropolis of Tokyo, but I am excited to try and improve my Japanese, get a haircut, and hopefully get to enjoy the peak blooms of the sakura!

We left the city! Thanks to @producer_sam for touring us around!
So happy my local ice cream spot is back open!
Big ♥️ to @cjunwin - I don’t think I would have made it through Lockdown 3 without his weekly zoom dance cardio party
Happy Easter! Hot cocoa with easter spice bunny marshmallow
My dream chair has arrived!!
Spring is on its way...