Even though 18 hours of thunderstorms commenced the moment we arrived, we were still delighted with the first impressions of our home for the next two weeks, Roam. We had to apply in order to secure a room at this “coliving and coworking refuge” where they curate a community of digital nomads for their 25 rooms.

Everyone gets their own room and private bathroom:

Our bedroom and small balcony 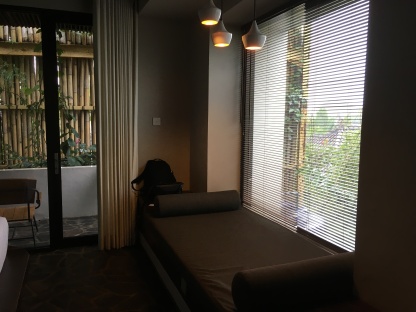 Small sitting area with a view of the nearby rooftops

Cafe and coworking space, with great coffee and also cocktails!

The yoga deck (including equipment) is available for use anytime 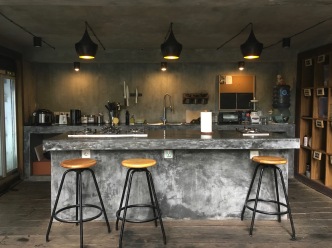 Everyone gets a spot on the shelves and in the fridge to store their food, plus they provide a lot of the basics like eggs, etc. 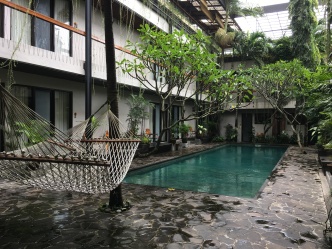 Pool for the residents

And there is also a communal pet, Lulu:

They organize events several times a week, and have negotiated discounts for residents at a lot of local cafes. It has all the social aspects of a hostel, but with nicer facilities and a much more diverse age range.  Most people stay for a week or more.

Like in many homes, the kitchen turned out to be the social hub.  As we were cooking and eating, we exchanged recommendations for Ubud, discussed various work projects, or just learned more about each others’ journeys.  It was a diverse community in age, gender, and country of origin and really interesting to hear what attracted people to Roam. Some of the other residents included: a recruiter, romance authors (2 of them!), an international tax attorney, a boutique owner, a woman who started her own line of pajamas (during her stay here!), a fitness instructor, a photographer, a digital storyteller, an entrepreneur and several developers; hailing from America, Australia, Canada, France, Russia and the UK.

By creating a space with such a specific intention of community, they have broken down the usual barriers to social interactions. It was very easy to strike up a conversation with others, and just as easy to excuse yourself if you had something else to do.

Having a built-in community was a really nice way to experience Ubud – one night we stayed up late drinking wine and discussing philosophy/politics, another evening a group of us headed to the Ubud Food Truck festival, and one afternoon I taught a Zumba class for any interested residents:

A favourite group outing was to the weekly farmer’s market a few doors away. Just before 9am each Tuesday, an organic farmer parked his truck next door and unloaded the harvest. At exactly 9am, the frenzy of grabbing commenced. It was a great way to get produce, and as much fun to watch as it was to buy. 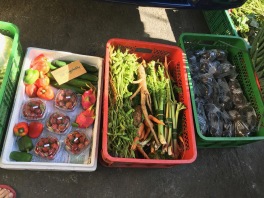 Edamame (still on the branch!) and some Dragonfruit

It was a little chaotic

Ubud is in the interior part of the island. Though it is only 15 miles from Seminyak, it takes over an hour to get there by car because the roads are small and meandering.

The landscape is much more lush by comparison. It has somewhat of a jungle feeling with dense greenery, tropical flowers, and sounds of birds and geckos all around. (I never knew how noisy those little lizards could be!)

While I don’t have any specific horror stories, I do feel like this is one of the buggiest places we have been (so far)… there was everything from giant dragonflies to huge wasps to beautiful butterflies and ants of all sizes.  I quickly learned to always keep any bags zipped up, or risk uninvited guests. (This applies to indoors as well as outdoors.) I will be surprised if I don’t find tiny ants inside my computer after we have left.

It seemed like there were even more temples and shrines here – it made walking to the grocery store more like a sightseeing trip.

We saw this guy on the way to the supermarket 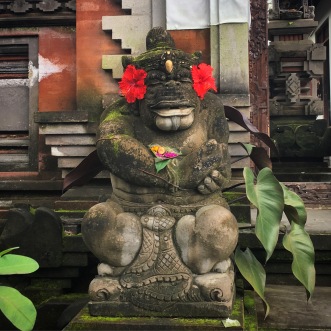 This guy was a few doors down from my gym 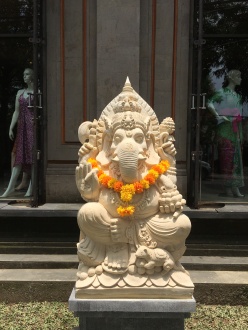 They were in front of shops, houses, pretty much every building…

The German thought the temples looked like they were designed in the game, Minecraft. Their blocky geometrics would certainly be easy to replicate in pixels:

There are so many vegetarian restaurants in Ubud that it was rarer to find a place that served meat. It was a hippie’s dream – you could get a smoothie bowl and a coconut milk latte at the same place where you bought essential oils and got some”vibrational energy medicine”.  I steered clear of the “emotional release quantum shift” (I’m still not sure what that meant) but I did appreciate the abundance of fresh, tropical fruits.  And to be fair, that place recommended some tea tree oil which quickly cleared up some very itchy ant bites on my legs.

It was such a delight to be overwhelmed for choice by the menus – at a normal restaurant I can quickly pick from the few items that are vegetarian. In Ubud, I have pages of delicious options and choosing just one or two things was tough! 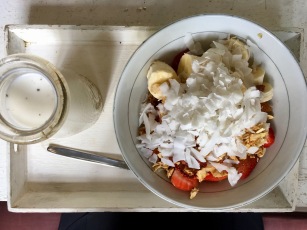 The sticky climate didn’t exactly make you want to do anything in a hurry, and we rapidly adjusted to the leisurely pace of the island. In the mornings, The German would retire to the working space for a coffee and computer time while I either went to a Zumba class or worked out on my own on the yoga deck.

Our afternoons were spent exploring the area on foot, hanging out at a local cafe, or sometimes I would opt to enjoy one of the many spas.

Labour is cheap and plentiful here.  While many shops and cafes seemed over-staffed with workers who weren’t especially attentive, the spas were a different story… there were an endless number of them, each better than the next. And since massages were $9-$15/hour, I was tempted to go daily.

One of my favourite spots was Karsa Spa in a peaceful setting overlooking the rice paddies. In addition to having incredibly gorgeous grounds and treatment rooms… 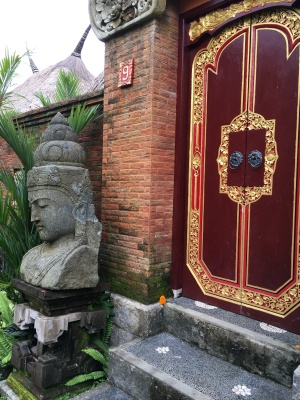 Entry to the treatment room

… the deep tissue massage was one of the best I have ever had. (I was sore for days afterwards.)

I also had an extremely decadent “Twin Massage”, which meant two therapists massaged me simultaneously! There really isn’t anything better than someone massaging your shoulders while someone else rubs your feet – all for $15!

(The German was quick to remind me that I shouldn’t get too used to this.)

It seemed like there were constant rituals taking place.  Some of them were quite small, like the daily offerings of flowers and rice to various spirits:

Daily offering in front of a spirit statue

The flowers are refreshed daily 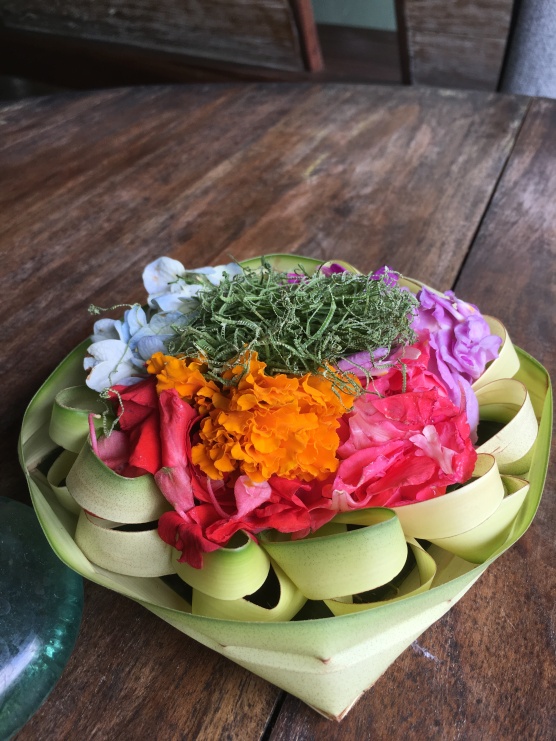 While others consumed the whole town.  We were fortunate to witness one of the largest, most elaborate cremation ceremonies in years. When someone really important/wealthy dies, they build these large floats:

The body is carried up the ramp and placed in the tower.  The ramp is then removed, and the bull and the tower are carried from the Royal Palace to a temple on the other side of town, accompanied by musicians and the entire population of Ubud.

It was a slow process. The floats took up the width of the street and required dozens of men to carry them. They would run for a while, then stop briefly to drink water and catch their breath:

Then there was a rallying cry of the leaders, the music would increase in tempo, and they would lift the structure and resume running:

I was sweating from just watching – I can’t imagine running down the street carrying some enourmously heavy structure. Once they reached the temple, everything was set on fire. (I was not dressed appropriately, so I didn’t go into the temple to witness the actual burning.)

Friends take note: something simple like this would be fine for me when it’s my turn. 🙂

We also visited Tirta Empul, a temple known for its holy spring water.  It was interesting to watch the bathing ritual, where people would immerse themselves under each consecutive spout of fresh spring water (fully clothed – sarongs are mandatory for men and women):

Even today, women who are menstruating are forbidden from taking part in any of the rituals, bathing or otherwise.

Thankfully, they relied on the honour system to enforce this, not any kind of inspection.

We have enjoyed staying at Roam so much that we have decided to return in mid March, after our adventures in Borneo visiting primate sanctuaries.