Borneo is the third largest island in the world and is shared by Malaysia, Indonesia and Brunei. It is home to some of the world’s oldest rainforests and 46 species of endemic mammals, the most famous being orangutans.

We arrived in Sandakan in the early afternoon. The island was incredibly green and looked like a jungle, even from above.

Each room at our lodge was its own chalet, nestled in the trees on the edge of a small river.

As The German astutely noted:

As soon as we got in our room, I inadvertently stepped on a massive wasp (thankfully I was wearing shoes). Walking to the main part of the lodge involved dodging bees, butterflies, ants, and whatever was falling from the trees. Also, fruit bats made a mess on our porch every night.

That said, I loved hearing all the sounds of the birds, frogs, lizards, and even the insects as we went to sleep each night.

Our first afternoon was spent at the Labuk Bay Proboscis Monkey Sanctuary. The 400 acre mangrove forest was originally purchased for commercial development. However, the owner fell in love with the monkeys and instead built a modest viewing area for tourists, leaving the rest of the habitat largely untouched.

Each day they provide a small amount of food to supplement the monkeys’ diet. (The sanctuary claims this is due to dwindling natural resources, but I suspect it’s really so tourists can get a closer look.) Still, these monkeys were certainly wild – there were no fences, and while they mostly ignored us, the displays of strength made between the various large males were intimidating.

They are normally very high in the treetops so it was absolutely amazing (and sometimes a little scary) to be that close.

I found them fascinating – the females had these adorable, witch-like pointy noses: 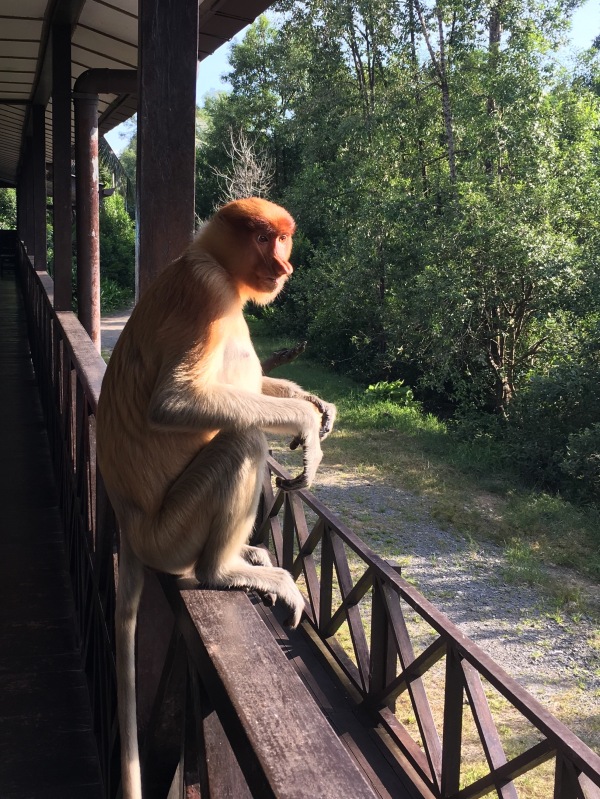 … while the males seemed like sad old men who needed a hug:

They made some really cute sounds:

And they put on quite a show – eating, grooming, fighting, swimming and even mating.

This turned out to be my favourite stop on our trip – we got to have close encounters with these fascinating animals with very few other tourists around. 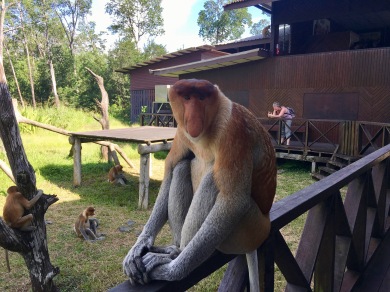 The Sepilok Orangutan Rehabilitation Center was one of the main reasons I wanted to visit Borneo. This organization rehabilitates former pets or orphans and releases them back into the wild. They have had great success, and see formerly released orangs successfully raising their own babies in the wild. Teaching these juveniles how to be orangutans is a tremendous achievement, and important work since they are critically endangered. 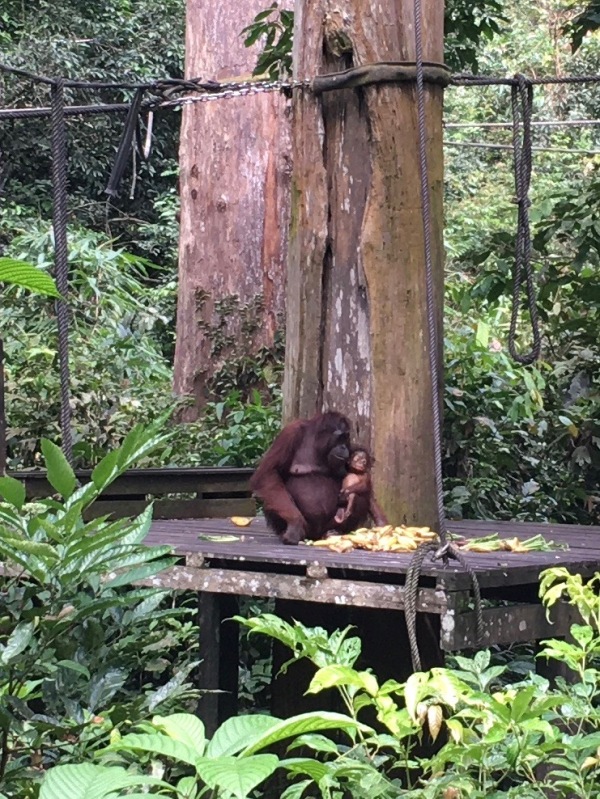 We were able to watch the youngsters getting their breakfast in the outdoor nursery. The goal of this area is to teach the orangs to stay off the ground (where they could come in contact with detrimental bacteria) and improve their climbing skills.

The observation area was behind one-way glass (to avoid over-exposure to humans) so while it was tough to get a good photo, it was a fantastic vantage point for watching them swing, climb and play.

We also visited the open air feeding platform where older orangs might come for a snack. Providing supplemental food makes sure the newly released orangs are getting enough to eat. It is also a great opportunity for the staff to observe their health, especially once they start having babies of their own.

Orangutans are solitary animals.  It was interesting to see how they each took turns at the pile of fruit, giving one another a chance to eat without being disturbed.

We were incredibly lucky to have a couple close encounters. (Only the youngest residents are quarantined in cages for a short period – all others are free to roam as they please, including leaving the rehabilitation center for the larger forest.)

This clever girl snatched a coconut and distanced herself from the other young ones as she did the hard work of breaking it open to retrieve the meat: 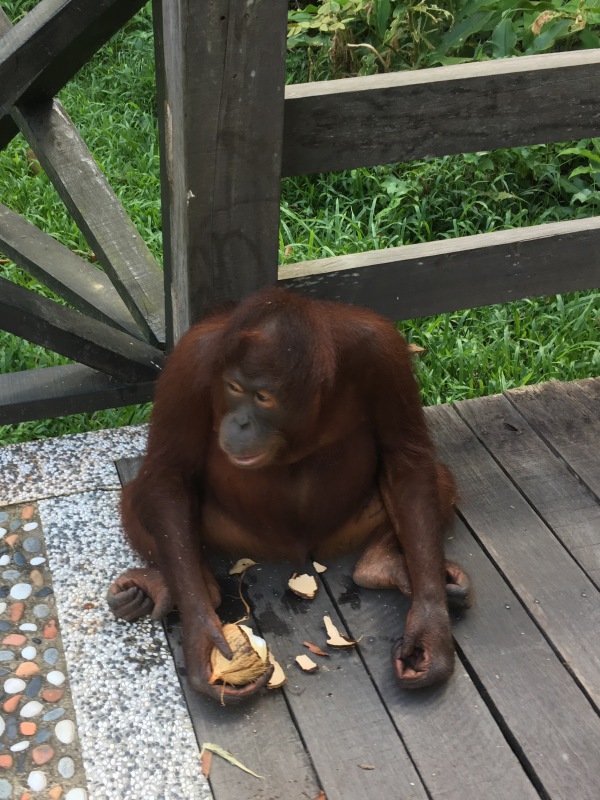 We also encountered this lady, who preferred to use the handrail of the visitor path instead of the trees as her route:

Crowds notwithstanding (it was a surprisingly popular spot given how remote Borneo is), it was amazing to have close encounters with them, and I never got tired of watching the little ones play.

Just across the road was the Borneo Sun Bear Conservation Center. They have 42 rescued (ex-captive) bears in large forest habitats. You can observe them via a canopy walkway.

These are the smallest species of bear – I am certain some of my friends have dogs that are larger.  It was tough to get a good photo from above, but they were very active and it was easy to spot them foraging for food.

While we were there, they also pointed out a deadly viper, resting leisurely on a tree: 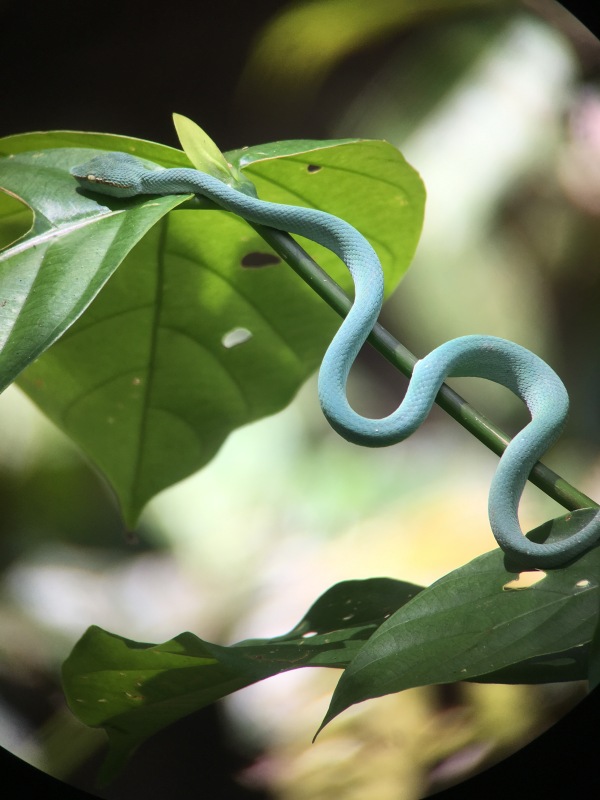 We opted to go on a night walk into the rainforest. As soon as they handed us rubber boots, I started to second-guess our decision.

The ground was very squelchy in places, with thick mud that tried to snatch the boots off your feet. I wasn’t terribly excited to see cockroaches or spiders, but we spotted an orangutan putting the finishing touches on her nest for the evening, the tiny frogs were cute and it was interesting to identify the sources of all the sounds we heard at night.

The next phase of our trip took place along the Kinabatangan River. Sukau Rainforest Lodge is located right on the river banks so there was quick access to game viewing by boat. It really felt like a remote location – we rarely saw other boats on the river, our phones barely got a signal, and there was a constant soundtrack of birds and bugs.

We met many different groups of monkeys on our first afternoon cruise. After seeing the Proboscis monkeys up close, it was nice to see them bounding through the treetops. We also encountered long-tailed macaques, pig-tailed macaques, salt water crocodiles, and a variety of unusual birds, including several kinds of hornbill. 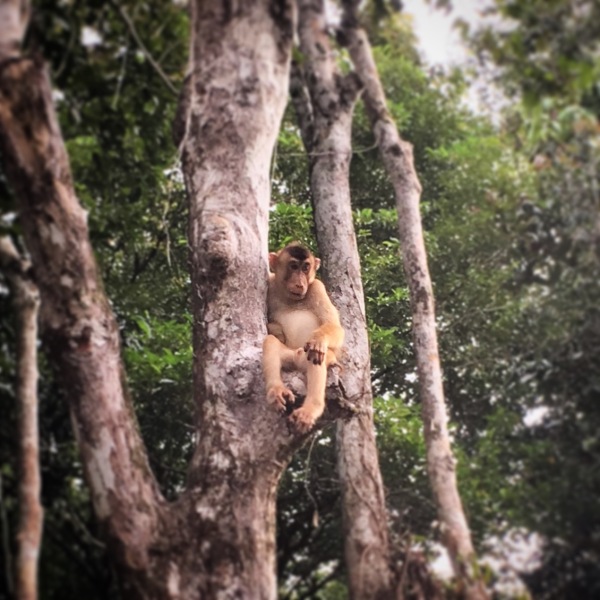 Dinner was served in an open-air pavilion over the water, where we took turns swatting beetles off of each other while we ate. (Lesson learned: avoid white shirts at night.)

We were both pretty surprised to discover that they woke you up at 5:30am each morning for the first cruise. (The German shot me a look of death when he realized that wasn’t a joke.)  This was obviously not going to be his favourite stop on this trip.

The setting of the lodge was really gorgeous and it was lovely to be nestled in the rainforest. However, the rooms lacked charm and the walls were very thin. (We could hear our neighbors snoring.) We weren’t sleeping or eating well, but the staff were wildlife experts and I loved seeing macaques run through the property.

And that’s why it’s called the rainforest…

We arrived at 5:45am for our first morning cruise, only to have the skies open up and start pouring rain.  (It was still on the edge of the wet season, so we knew that was a risk.) The boats were open top and we didn’t have hardcore rain gear, so we opted out of the excursion. (Frankly, our guide was talking everyone out of it as he kept explaining none of the animals would be out.)

It poured all day and into the night. We quickly understood why all the structures were built on stilts:

The lodge tried to entertain us with a lecture about orangutans and a walk around the property via a covered walkway, but there wasn’t much else to do.  It was hard not to be disappointed… the lodge wasn’t very comfortable, wifi was scarce, and the only wildlife  we saw were mosquitos. It felt a bit like we were trapped in a terrible summer camp.

I braved the elements for the afternoon boat ride. We did spot a large crocodile and a few monkeys, but had to rush back due to another thunderstorm.

Thankfully, the rain calmed a bit and our new guide did everything in his power to help us make the most of our last day. Even when we couldn’t find wildlife, he taught us how to listen for monkeys based on the sound of the leaves rustling (macaques shake the trees when looking for food, while orangutans use their weight to bend the trees so they can switch from one to another without jumping), and how to identify birds based on their flapping patterns (the Oriental Pied Hornbill always flies with 3 flaps followed by a glide).

Though there was only one orangutan sighting, we got to see quite a few monkeys, crocodiles, and rare birds plus I definitely learned a lot about the local wildlife.

One of the recommended activities was to visit Gomantong Cave and watch 300,000 bats perform a mass exodus at dusk. The cave is also home to thousands of swiftlets, who create the vaulable nests used in bird’s nest soup and Chinese medicines.

What they don’t tell you in advance is that the cave also contains the largest infestation of cockroaches in the world (literally).

It started off innocently enough with a walk through some lovely canopy to the large entrance to the cave. The wooden walkway made it look like it would be an easy jaunt.

However, once we hit the darkness we had the dreaded realization that the walkway and handrail were crawling with massive cockroaches. (Think Indiana Jones and the Temple of Doom). It was like being in a horror film.

Everything was slippery from the moisture of the cave and thousands of years of bat poop. The last thing I wanted to do was grab the roach-covered handrail so I was moving pretty slowly.  The German decided to ditch me and move rapidly toward the exit while I took timid steps, continuously yelling at our guide to stop using his flashlight to illuminate the horror show.

Suffice to say, we were thrilled to get out of there. While the bat exodus was interesting to see, I’m not sure it was worth braving a cockroach marathon.

Fun fact: 6 guards have to sleep in the stinky, cockroach-infested cave to keep people from stealing the valuable birds’ nests. Next time I am having a bad day, I will remind myself that things could be worse – at least I am not one of those guards.

After a series of boats, cars and planes, we spent our last night in the large city of Kota Kinatabu. Our hotel room was delightfully modern and bug-free, and we had our first great meal of the week.

As much as I enjoyed seeing the wildlife, we both agreed that we aren’t jungle people and were excited to be headed back to Bali.  Still, I will miss having easy access to so many monkeys and apes.

Here’s a short compilation of some of the many primates we saw: