Beth & Todd arrived in Japan after an epic day of traveling, including flights from San Francisco to Vancouver to Tokyo, and then a 3 hour train to Kyoto. We rented a 2 bedroom “typical” Japanese home for their stay. While this was the best of the AirBnBs we had in Kyoto, it was still very compact and not entirely comfortable – there were many opportunities for The German to smack his head on things, the stairs were so steep it was like climbing a ladder, and the bedrooms smelled strongly of boiled cabbage. We just weren’t having the best luck with AirBnBs in Japan.

Despite their jet-lag and lots of rain, we spent our first full day together running all over Kyoto, including visiting Fushimi Inari Shrine, eating ramen, drinking craft beers, buying gifts for friends, drinking several lattes, and generally enjoying all the random strange signs and other foreign weirdness.

At the famous Fushimi Inari Shrine

It was a very wet day 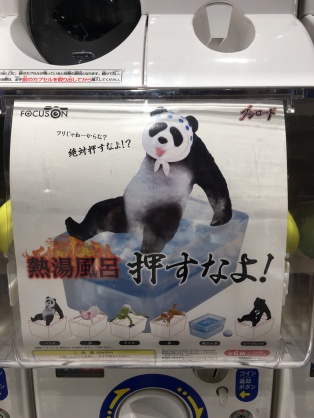 When we visited the famous Kiyomizudera Temple, a timid group of students approached The German and asked for his help with a school project. They were visiting from Hokkaido and were obviously tasked with asking native English speakers several basic questions as conversation practice. At the end, we all took photos and they gave us this hand-crafted introduction to their town as a thank you gift.  The whole exchange was adorable and we were happy to help them. 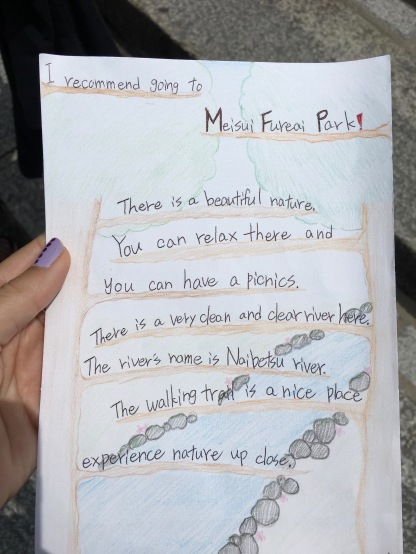 One side of the hand-ilustrated guide to Chitose

Eating Our Way Through Kyoto

People usually visit Kyoto to see all the beautiful temples and shrines, but our real priority was food.  We joked that the goal was to eat until you hurt, then walk 20 minutes and eat some more.

One night we had an 8 course tasting menu highlighting local tofu, served to us in a traditional private dining room. I loved it but The German didn’t care for the texture or subtle flavours and would probably be ok never eating tofu again.

We also visited the okonomikyaki spot I frequented when I was studying in Kyoto. It was just as good (and giant) as I remembered: One night we gorged ourselves at Japan’s “Gyoza Champion” spot – they had dozens of different dumplings and we did our best to try them all. And we also made regular stops for street food snacks, mochi, and green tea ice cream:

Todd enjoys some takoyaki (breaded octopus) at a local shrine

Our favourite ice cream spot – Beth is having black sesame.

It was strawberry mochi season, which I took full advantage of.

We became obsessed with these posters, which we assumed were politicians campaigning for election (but I couldn’t read the kanji, so who knows if that was accurate).

We decided the dynamic hand gestures were far better than boring headshots, and the one who looked like he was conjuring a spell was our favourite: 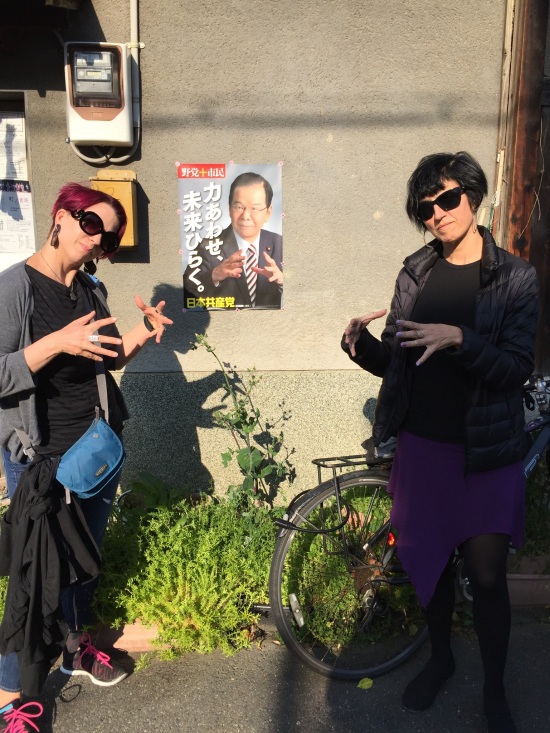 And then there was this:

We weren’t sure if these wifi ads were mocking the political posters or if they just looked similar to us because we couldn’t read anything. Regardless, we all agreed that those politicians wouldn’t stand a chance if they were running against that adorable cat!

Beth & I made a quick trip to Nara to see the giant buddha and the abundant deer.

Both the giant buddha and the building that housed it were impressive:

One of the statues supposedly had healing powers, so I treated it like a free doctor appointment and made sure he saw to my rib and elbow:

After that we headed for the dangerously interactive deer: 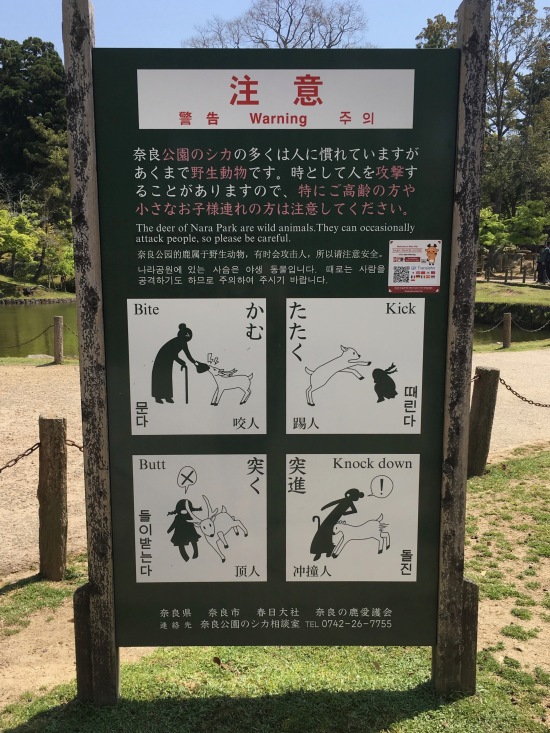 The signs didn’t lie – the deer knew we had snacks for them and weren’t at all timid.  Beth was very popular and not exactly thrilled about it… one attempted to eat her sweater in hopes of finding more cookies.

That said, they weren’t without charm. The deer have learned that bowing is more likely to get them a snack:

After 5 days in Kyoto, we said goodbye to our smelly AirBnB and took the shinkansen back to Tokyo for the remainder of our adventures together.

We had one day where we alternated between refined, sophisticated experiences, like finely crafted cocktails at a bespoke cocktail bar:

Gen Yamamoto seated only 8 people at a gorgeous bar made of 500 year old Japanese oak. The cocktails were unexpected combinations of local ingredients that were tasty and refreshing.  It was a delightfully refined experience.

We followed this up with Robot Restaurant, which is a robot-filled day-glow assault on all of your senses. It’s like nothing you expect, yet somehow conveys all the strange delight that is Tokyo. Videos and photos don’t do it justice, but Todd’s expression kind of says it all: 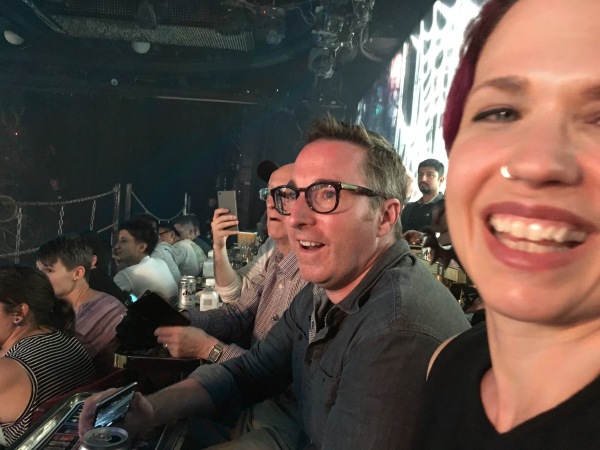 In addition to Robot Restaurant, we had numerous other “only in Tokyo” experiences, including:

An outing to a Yayoi Kusama exhibit which included a large number of her paintings, sculptures, and installations, including one were we got to contribute to the art: 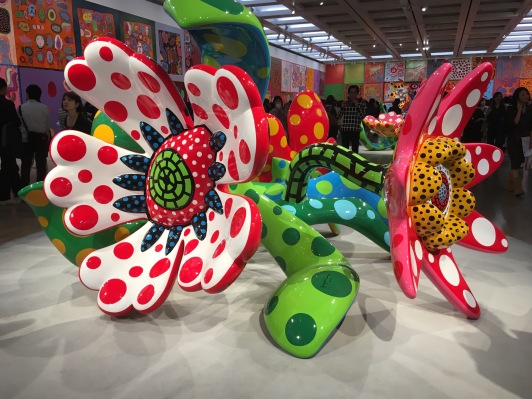 Some of the many large flower sculptures

A trip to the fabulous Ghibli Museum, which was a Totoro pilgrimage for me.  There were many interactive exhibits, including a life-sized cat bus.  (No photos were allowed inside, unfortunately.)  Getting tickets was a challenge, but absolutely worth the effort.

A visit to the Line store, home of enourmous stuffed animals and the most complex yet wonderful photo booth ever. (Line is like the Japanese version of What’s App or Facebook Messenger, only they have adorable mascots integrated throughout the app. The store is full of all sorts of products with the characters on them, and a photo booth that magically made us look young and cute.) 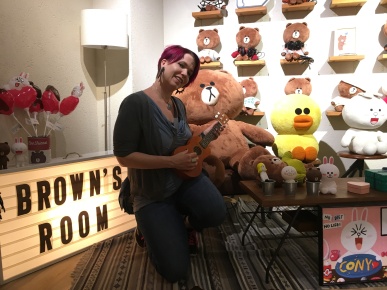 Beth’s audience is not impressed with her musical skills 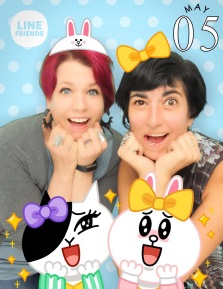 My skin has never looked smoother!

Stalking some Harajuku girls as they were shopping in a mall: 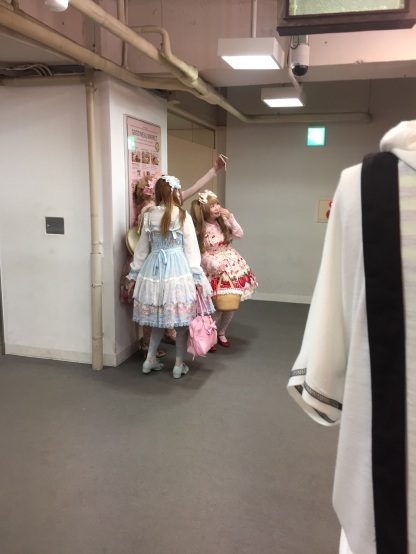 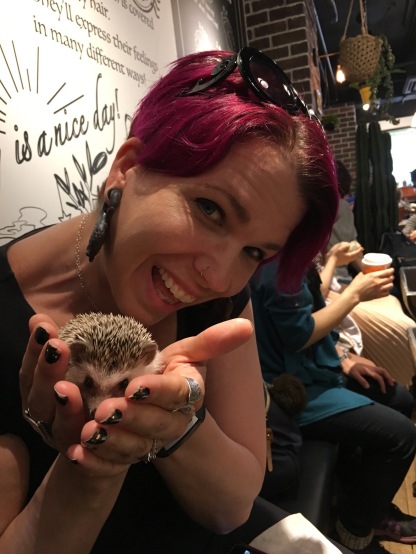 And making our own onigiri with our housemates at Roam. (Onigiri are rice balls filled with pickles or seafood. Their normal form is seaweed-wrapped triangles, but for this event we got more creative.):

Beth made a cat

Mine had a unibrow

These were the demo models – they made it look easy!

Japan has a lot of great food, and our non-stop eating continued in Tokyo. It seemed like we were planning what to eat next before our current meal finished.  The Japanese have a concept of eating until you’re 80% full (“hara hachi bu“), but we joked that our style was closer to eating until we were 180% full. When we learned about the word “kuidaore” – eating until you pass out – we felt like it was our new theme. 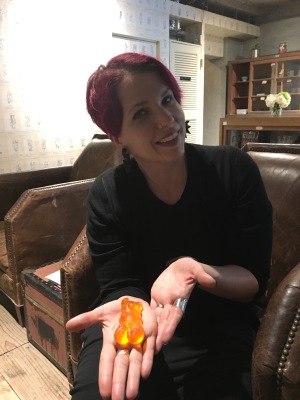 This gummy bear was nearly the size of Beth’s head.

Possibly the best pizza ever 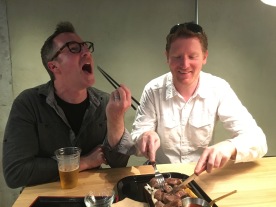 Todd was excited to try Koba beef in Japan

The German is very excited for his wagyu steak

Since we were all constantly taking the same photos, The German started taking these: 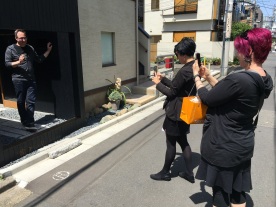 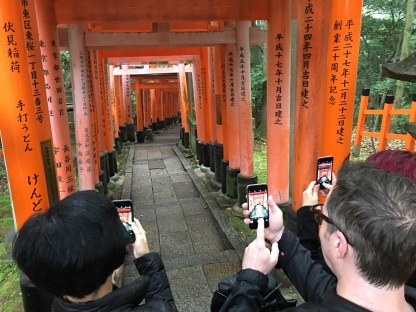 And when we all took too long to photograph our food, he invented something we now call “Finger Bombing”:

It’s a great way to annoy your friends who ceaselessly take food photos.

At every shrine, temple, and flowering tree there were many yukata-clad Japanese taking photos of each other.  They didn’t just go for the ordinary tourist shots in front of an attraction, but would turn their back to the camera and gaze thoughtfully in the distance, or gesture gently to a flower. We did our best to incorporate these new techniques into our own photos:

Appreciating the flavours of this sake

Beth contemplates the beauty of this temple

Though this eventually devolved into our usual antics of impersonating things and generally being ridiculous. (You really can’t take us anywhere.)

We couldn’t resist posing for the jumbotron 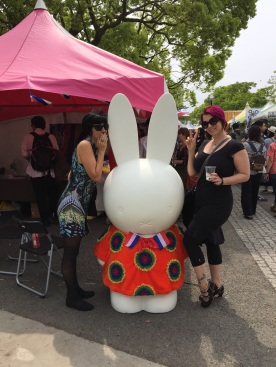 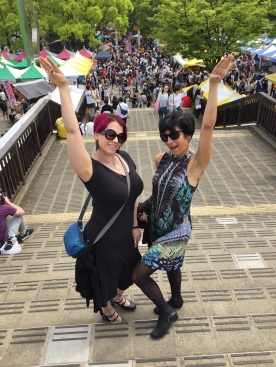 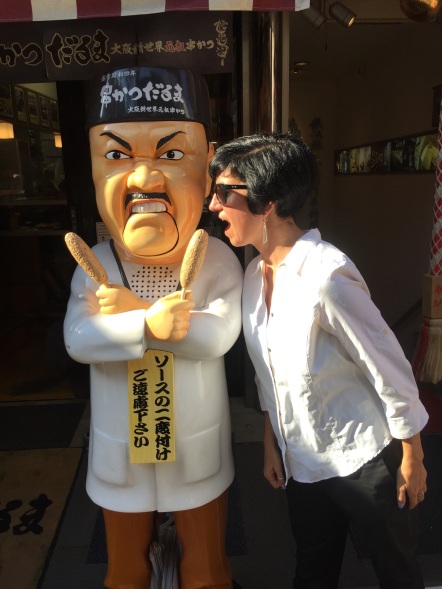 We have no idea what Woz is advertising 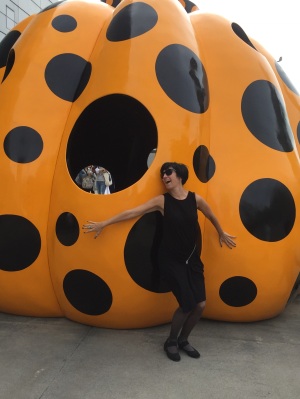 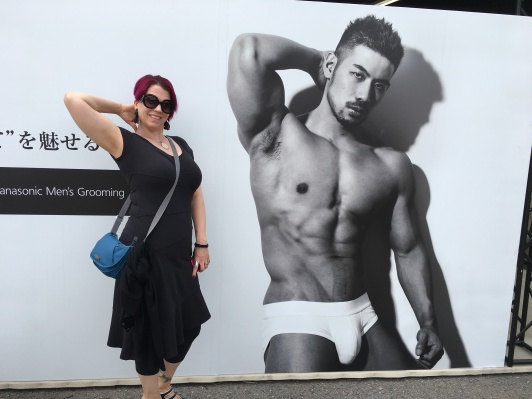 After spending a couple hours sampling all the sake at the airport lounge, we parted ways with Beth & Todd… saying it was fun to be with them in Japan would be a major understatement. (We spent as much time laughing as we did eating!)

Beth & Todd are heading back to SF while The German and I are en route to Mexico. I am signed up for a 4 day retreat with a YouTube dance fitness star (The Fitness Marshall). (My good friend Sue is meeting me there, while The German relaxes at a nearby town.)

After that, The German and I will head to Cancun where we will officially end our year (or 13 months) of travel!

2 thoughts on “Japan with Friends!”