We took the Shinkansen from Tokyo to Kyoto.  The whole experience was delightfully civilized – the train was perfectly punctual, very clean, and had spacious seats with a window at every row. Tokyo Station had an impressive array of food packaged especially for travel so we enjoyed a nice lunch during our 3 hour journey.

Unfortunately, it was downhill from there.  The weather was cold, grey and rainy, and our AirBnB was comically problematic. Because it was peak cherry blossom week, we should have booked a place 6 months in advance (or more). There was very limited availability event a couple months out, so we took a gamble on a listing with no reviews and only one photo because it was reasonably priced. (Any hotels with rooms open were close to $1000/night because everyone wants to see the cherry blossoms in full bloom in Kyoto.)

Though nicely styled on the surface, the AirBnB turned out to be very poorly designed in function. It was one small room plus a tiny bathroom with the trains running outside the front door. Our host suggested we buy earplugs (gee, thanks), but having lived on Market St in SF, the train noise wasn’t the biggest issue.

It was clear that the host never lived there – the only furniture were the Japanese futons for sleeping and a coffee table. There weren’t any garbage bags, or cooking implements, and there was only 1 plate.  In order to use the induction burner, we had to unplug the refrigerator (there was only one plug in the vicinity). The shower & sink were in one small corner together, making it awkward to use either of them.

Worst of all, the host lied about the amenities and there was neither a washer nor wifi. While we could certainly go a week without washing clothes, the lack of wifi was extremely inconvenient and we burned through all of our data on our local SIMs in 5 days. This issue highlighted all the shortcomings of AirBnB – we paid for things that weren’t provided yet it was impossible to communicate with a real person from the company. (While I could handle basic communication with our host, the complexities of explaining that we felt scammed were beyond my vocabulary).

As a result, we spent far more time in Starbucks that I care to admit. Though I am not a huge fan of their coffee, I was incredibly grateful for their decent wifi. (Hotspots are pretty rare in Japan, unfortunately.)

Our disappointing AirBnB didn’t prevent us from having some fun, though. Getting noodles with friends started to emerge as a welcome theme. Blake & Santiago, pals from SF, were visiting Kyoto with Blake’s parents.  We all took a break from our various cherry blossom strolls to meet for soba at a restaurant that has been making it for hundreds of years. As you’d expect, the noodles were fantastic and it was fun to see them.  The German especially enjoyed exchanging sympathetic tales of banged knees and near misses on concussions… the struggles of being tall men in Japan. (Blake & Santiago make The German look short).

We spent another day with them, powering through several top sights including a temple with some beautiful gardens, the bamboo forest, and a monkey park. We really enjoyed seeing them and exploring Kyoto together.

“Everyone, point at the best bamboo!” 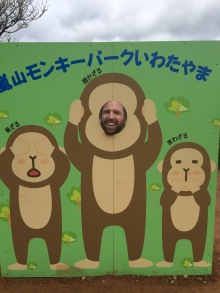 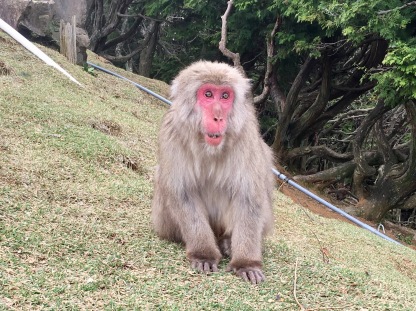 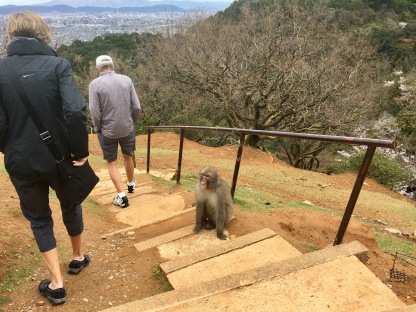 Blake’s Dad had no idea he was being followed…

We were very lucky in that we managed to hit Kyoto just in time for the peak blooms.  Like Tokyo, everyone was out to admire the flowers and take millions of photos. However Kyoto-ites upped their game and often had professional photographers in tow. We saw a number of shops where you could rent a kimono, get your hair & makeup done professionally and hire a photographer for the day.

People in Japane are always so polite.Without being asked, people would queue up to take photos from certain vantage points, or patiently wait to cross a bridge or take a narrow path while others were taking photos.

I spent the first few days going to all the major cherry blossoms spots and taking far too many photos… here is just a small sampling: 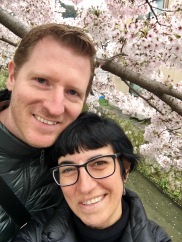 All the fallen petals collected at the end of the canal… 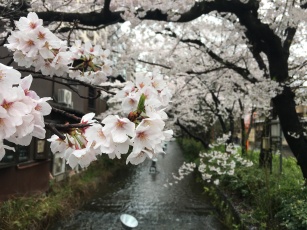 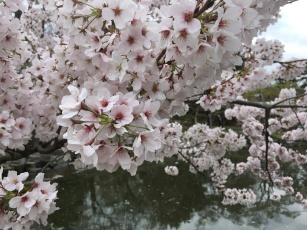 Japan is known for being safe, clean and orderly and I am pleased that none of that has changed. I would much rather queue for the subway than push my way on.

There are far fewer smokers than I remember. Even the sidewalks have designated smoking areas!

Though finding vegetarian food in restaurants has always been a challenge in Japan, I had forgotten how great and reasonably priced prepared food is. Every place from 7-11 to supermarkets to fancy department stores had a huge selection of freshly made food – it was a great way to sample a lot of different dishes and though I occassionally had to ask a clerk to read the kanji to me, it was otherwise easy to find vegetarian options.

Having failed at finding in-person Japanese classes (the shortest ones required a one-month committment), I scheduled some Skype lessons with native speakers.  While I can (mostly) understand what people are saying, my speaking is still coming very slowly (and likely inaccurately) so I hope some tutoring can help me rapidly improve.

We have a week and a half before our pals Beth & Todd arrive from SF, at which point we will go into hard-core tourist mode. In the meantime, we gleefully changed to a new AirBnB.  While it was objectively kind of drab and lacking in charm, it had incredibly fast wifi and actual furniture so it felt like a major upgrade. We are both much happier.

And now, your moment of zen: 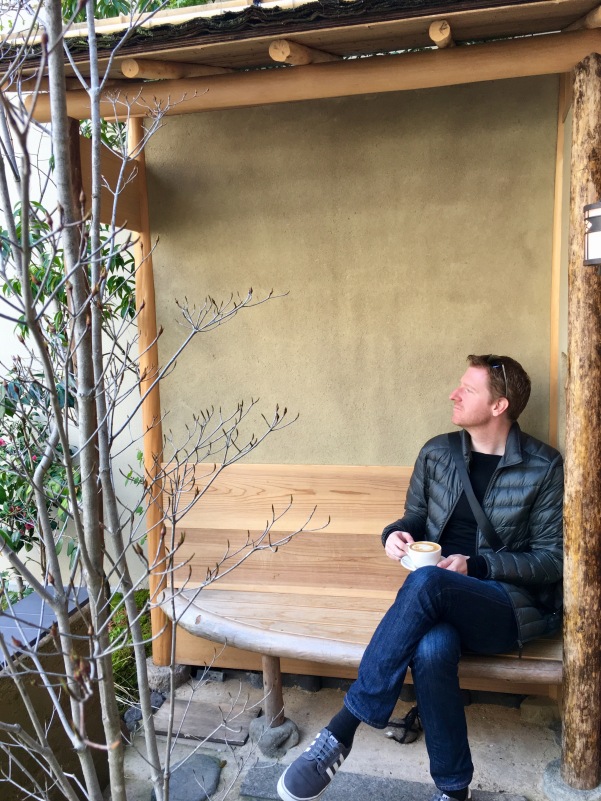 4 thoughts on “The Beginning of Kyoto”