I think it’s safe to say that after 8 months on the move, we were both feeling a bit travel fatigued… it is surprising how much time and effort it takes to get comfortable someplace! Even though we have been traveling slowly, by time we have figured out where to get good groceries and what Zumba classes are happening and what’s going on in a city, it’s been time to move on and start the process over again somewhere else.

We were really enjoying Melbourne, so we decided to forego New Zealand and stay put for almost 8 weeks. I had finally found a bunch of dance classes and developed an addiction to some local goat cheese, and The German discovered some tech-related meet-ups, and there was also the 5 weeks of free accommodation through petsitting gigs, so we weren’t feeling motivated to move on in a hurry.

I have often described Melbourne as being “the best bits of San Francisco and London”. It feels familiar in a lot of ways, which is probably what made it so comfortable for us:

It’s a very food-centric city with everything from high-end, molecular gastronomy restaurants to casual neighbourhood cafes, and every place is vegetarian-friendly. They even have food truck festivals, artisanal ice cream, and bakeries where you can stand in a long line!

Enjoying a “nutella burger” at a food truck festival

These freshly dipped ice cream bars at an Australian tradition

Just some of the cheese at Spring Street Grocer

Melbourne means business when it comes to gelato!

Coffee is serious business, with hipster lattes being the default. We rarely saw a Starbucks. 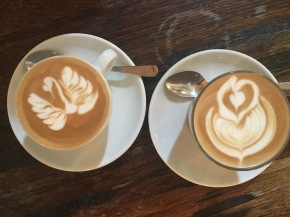 I have been told this is not a joke…

It’s easy to get around without a car (trams being the most popular form of public transit): 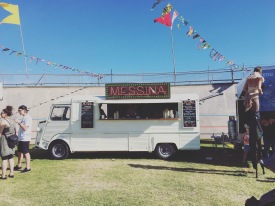 A gelato truck at the Coburg Velodrome Food Truck Festival 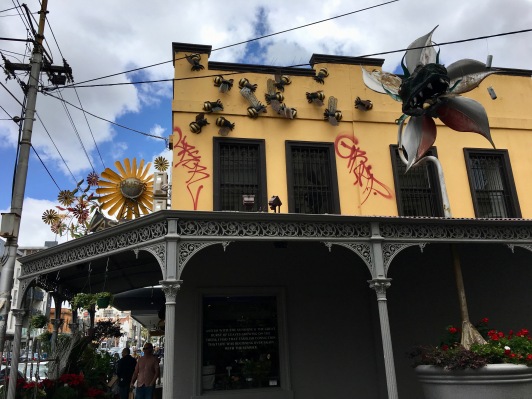 This building appropriately contained a florist

Love the row houses here… especially the one in the middle.

There was a giant slip-n-slide set up downtown just after NYE.

It does have a few unwanted similarities… In SF, everyone says “if you don’t like the weather, just wait a few minutes”.  In Melbourne, the saying is “all 4 seasons in one day”. So in other words, I still needed to bring a jacket even if it looked sunny.

All in all, Melbourne was safe, clean and friendly, with plenty going on. We liked it immensely. And as a bonus, I got to take care of some pretty fantastic critters:

Paddy, our pal over xmas 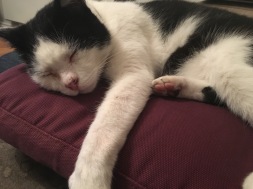 Hallee is likely suffering luggage withdrawal since we left

Another similarity to San Francisco is that wine country is very accessible. Yarra Valley is only about an hour’s drive from Melbourne and is known for Chardonnay and Pinot Noir production.  The German wasn’t in the mood for tourist activities, so I booked myself onto a small group tour through Vinetrekker, whom I highly recommend.

We went to 5 different wineries and tasted over 40 (!!) different wines… thankfully there was also plenty of food included along the way, including some fabulous cheese. 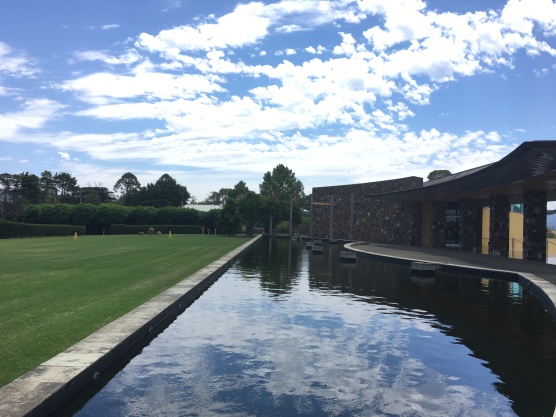 It was a friendly group of 11 people with a knowledgable but not over-bearing guide. It included Melbourne locals as well as tourists from Amsterdam, Manchester, and Brisbane. There was a doctor, a pilot, a chef, someone in finance, someone who worked for Telsa, and a restauranteur… it was a diverse and fun bunch!

We went to a few smaller, family-run wineries that had some really exceptional wines, as well as some of the larger producers (who obviously know what they are doing). Chandon is one of the biggest in the country – they have a huge vineyard where they produce plenty of sparkling wine in the style of champagne, as well as a sparkling Shiraz that is unique to Australia (and the only kind of Shiraz I like).

Unlike Napa, we never felt overwhelmed by crowds, even at the larger houses. Most places offered some lovely food options to accompany their tasting… at one winery I bought more cheese than I did wine.

I enjoyed getting to know everyone and getting out of the city to see more of Victoria:

Attica is one of the top 50 restaurants in the world. It’s a small place with barely a dozen tables that book up months in advance. We didn’t plan far enough ahead to secure a reservation, but we got really lucky with a last-minute cancellation. (I put us on the waiting list for every night we were in town – it was like winning the lottery when they called!)

All the dishes were Australian flavours with a molecular gastronomy twist. Ingredients were grown locally, much of it from their own farm.  And yes, The German ate kangaroo. Most dishes included at least one item we had never heard of – things like wattleseed, bunya bunya, Santa Claus melon, and quandong.

Though we’ve been trying to be more budget-conscious lately, it was a unique experience with really wonderful staff… well-worth the splurge. 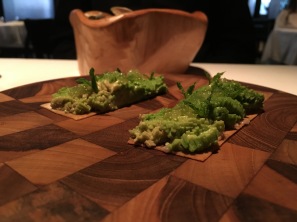 An Imperfect History of Ripponlea (told with tarts) 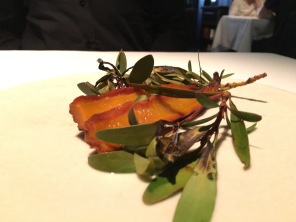 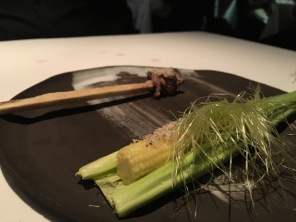 Baby Corn (served in husk), Beef (served on the bone) 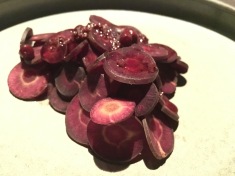 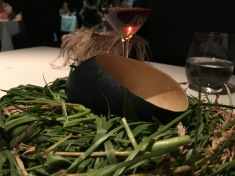 I’m not sure why it took me this long to arrange a couple FaceTime dates with some friends from SF… it was so fun to interact in real time! At one point the doorbell rang and while I went to answer it, I could hear my friends Beth & Sue laughing in the background… at that moment it really felt like they were in the living room. It was really nice to see folks, and we spent hours drinking wine and laughing until our devices ran out of battery.

We also met a few folks in real life, including Robert Padbury’s brother (and his brother’s wife) who gave us all sorts of tips on Melbourne and insider knowledge. We also got to see some hilarious childhood photos of Robert (which I cannot unsee), so that was a treat.

And we spent some time with a really interesting couple that The German met through a digital nomad community (called the Nomad List – it’s a really useful source of info for people who are on extended travel).  Jodie & Ben are a talented duo with multiple businesses. They spend every other month at their home in the UK, and then stay somewhere else in the world for the alternate months.

They are an impressively productive couple who are also very serious about powerlifting… despite Jodie’s pixie-ish appearance, she could easily lift 2 large men. They’ve had some really unusual experiences and it was especially interesting to hear how they manage to make their part-time remote lifestyle work.

I will admit that I lost days reading the New York Times and panicking about what is happening in US politics, and I have succumbed to more than one futile Facebook debate. It feels like everything is out of control, and it’s hard to know how to help when I am so far away.

I was thrilled to discover there was  version of the Women’s March in Melbourne. While it was modest in size compared to DC, LA and SF, there were still a lot of people and a lot of great signs. 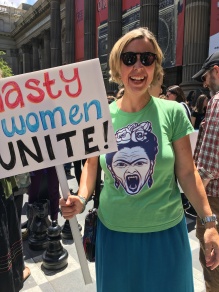 Such a great t-shirt! 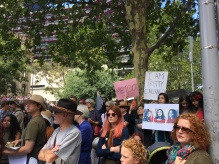 I am also pretty concerned

I was impressed that they were distributing leaflets with suggestions of follow-up actions. It was divided into 3 sections: for Americans, for Victorians, and for Australians.  I was also pleased that the police were passive observers, who mainly seemed to be occupied with ensuring no one got hit by a tram (as the location was next to a very busy stop).

The speakers that we saw were focused on the themes of inclusion (ie. pro-immigration/anti-racism), women’s rights, and the environment.  Their point was that US politics affects everyone, especially when it comes to the environment. They were encouraging everyone to put pressure on their own government to not accept hateful speech or stay silent on policies that could have local ramifications.

I found it very comforting to be there.  It was validating to see that all these people who are on the other side of the planet also think the situation is insane. It was nice to be part of a large gathering and not be fearful of the police or the others in the crowd.  And it was especially great to hear people preaching positive sentiments – the language was intended to inspire and lift people up.

I have been struggling about how to be politically active while abroad. I am signing petitions, sending emails and trying to make phone calls via Skype (though it’s hard with the time change).  I have also donated design support to some worthy causes . And as many of my friends saw on Facebook, I spent a few hours encouraging businesses to pay more attention to where their ads were appearing… I was very pleased with how quickly the businesses reacted and took positive action.  It was an easy thing for me to do, and so satisfying to see that it had an immediate impact.

There is so much division in the US right now – I hope we can find a way past it.

This is the first country where people have constantly commented on my accent.  In my mind, I have a “neutral” accent (despite growing up in the southern US), but “neutral” to me is “American” to everyone else.  While I feel really comfortable here, I apparently sound very foreign.

Meanwhile, The German clearly looks really German because people make that assumption before he even opens his mouth.  It’s funny how often people approach him speaking German right from the start. (It even happened on the beach in Zanzibar.)

I have to confess I am a little sad about leaving Melbourne…  I have been loving all the dance classes (which I have been doing 7 days a week, sometimes multiple times per day) and am leaving just as I started to get to know the other students. I even graduated to having an official “front row spot” in one of the BodyJam classes, next to a fabulous gay boy who went from throwing shade to insisting I stand next to him. (My fellow dancers know that this is a serious honour.)

I’ve become addicted to a local goat cheese (marinated in olive oil and peppercorns – it’s seriously amazing), figured out my favourite local wines, and have been here long enough to have sampled all the artisanal gelato producers and determined my favourite. (It’s Pidapipo.)

In the last few days, I got one more good haircut, stocked up on beauty products from Aesop, and ate as much gelato as I could manage… ready or not, it’s time to head to Bali!