I am so grateful to my amazing friend Dan, who speaks Thai fluently and has spent a ton of time in Thailand, for giving us an incredible amount of detailed advice.  We could have stayed here for months following his recommendations, and we arrived feeling better prepared because he educated us on all the basics.

That said, we started in Bangkok (against Dan’s recommendation). He warned us that the city can be overwhelming, especially the choatic, never-ending traffic. He wasn’t kidding. On the way to our hotel from the airport, our Uber got rear-ended. It was not our driver’s fault and everyone was fine (we were stopped in the ever-present traffic and someone rear-ended the person behind us, who got pushed into us). We then spent about an hour on the side of the road while all the drivers sorted out the details and received paperwork from the traffic cop. Welcome to Bangkok!

Traffic really is relentless. Hotels and other venues hire staff specifically to stop traffic just so cars can enter and exit their driveways. And walking is also a challenge. In Pengang, you had to be constantly vigilant about large holes, pipes, parked motorbikes or a million other things that could be obstructing the sidewalk.  In Bangkok, if there even is a sidewalk, you have to dodge street vendors, motorbike taxis and the occassional giant cockroach. Plus vehicles don’t stop at the few crosswalks that do exist, so crossing the street is a nightmare unless you can find a pedestrian bridge. In other words, its like playing an advanced game of frogger, but you only get one turn.

Thailand’s king died on October 13, 2016. He reigned for 70 years and was beloved by the people (as mandated by law).  Even though we arrived over a month after his death (the first 30 days are the most intense mourning period), there was still plenty of evidence of his passing.  Many people were still dressed in black, and the king’s portrait (surrounded by tons of flowers) and messages of condolences were everywhere. Entertainment, like concerts and sporting events, ceased and many bars and clubs had to close early, though that seems to be lessening now that the first month has passed.

Every single building has some kind of display honouring His Majesty  – usually a portrait in a gold frame, surrounded by fresh flowers and black and white ribbons. Here is a small selection of photos, which I took subversively as I was unsure if it was ok to photograph them:

One day we wandered into the area of the Grand Palace, not realizing that for the first 100 days there is a chance for people to pay their respects at the king’s grave.  Thousands of people per hour head there every day to mourn the king, clad in black and carrying their own portrait of him. Impressively, everything is calm and organized, facilitated by a huge community of volunteers who offer information, prepare food, distribute water, etc. Everything was provided to the mourners for free, which was so lovely – even the flowers to place on his grave were being given to each person as they entered the palace gates.

As we stood near the gates looking bewildered, a volunteer came over and welcomed us in. However, neither of us was wearing black and my passport (which was needed to enter) was at the Vietnam Embassy receiving a visa, so we didn’t venture inside the walls.

On a lighter note, I read about a unicorn-themed cafe and felt it was imperative to check it out.  It’s pretty much what you’d expect/hope for: a pastel coloured room filled with sugary treats, playing non-stop Disney music with stuffed toys and figurines of all sizes on every available surface.  Even the ceiling was decorated with unicorns. And they have unicorn onesies you can wear while you eat.  The German was a very good sport about this (and not the only guy who had been dragged there).

I bribed him with cheesecake to take this photo…

The silverware was bejeweled, naturally 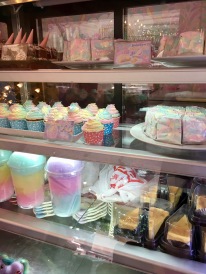 What else would you expect them to serve?

This was undrinkably sweet – must be meant for unicorns 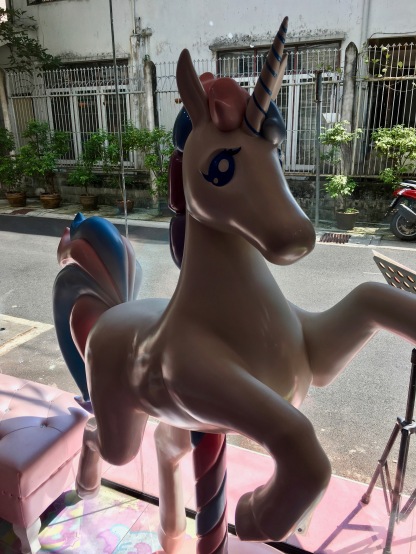 The cafe is very easy to find, as this is in the window.

Yes, even the toilet was themed

We were surprised to discover that two different friends from Apple were randomly in Bangkok so we all got together for dinner. Caro was on her way to Bali with her boyfriend, while Ivan was on his way back to SF, having just completed a motorcycle trek in Nepal.  It was so fun to see some familiar faces and catch up!

We met up with Ivan again on a subsequent evening, and found ourselves in the charmingly named “WTF Bangkok” bar, where a local demanded everyone join her in singing along to everything from Britney Spears to David Bowie to Guns & Roses.

Several drinks later, it was time for a midnight tom yum fix:

We finally decided to heed some of Dan’s advice and book a day trip to Ayutthaya, which was a capital city of Thailand until the Burmese invaded and destroyed it in 1767. There are so many temples there it would be impossible to see them all in a week, let alone a single day.  We managed to visit four before taking a boat ride back to Bangkok.

Thailand’s Buddha is tall and thin and always has a peaceful expression.  Even though we were part of a large group, we had time to explore on our own and I found it very calming to be in the temples with the soothing smile of the Buddhas.

The temples tend to be very ornate (if they haven’t been destroyed by war). Though our guide made far too many jokes along the way, he was also very knowledgable and it was really nice to learn more about Buddhism, the customs, and how to enjoy the temples without interfering or accidentally disrespecting anyone. 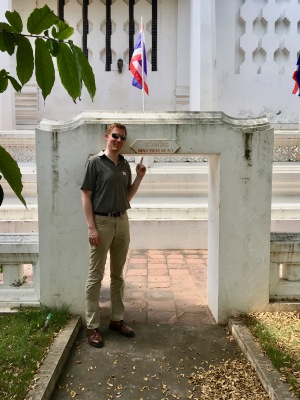 The King’s pavillion for relaxing… its only accessible by boat. 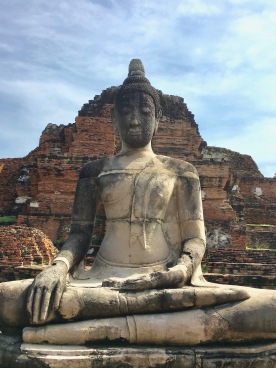 A peaceful Buddha in front of the temple ruins

The largest golden Buddha at this temple (filled with gold Buddhas)

A pavillion for the ladies. 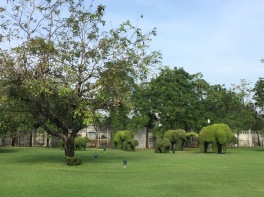 A previous King loved animals, so there is a lot of topiary on the property.

I’m not sure who this guy is, but he is creepy…

One of th elargest reclining Buddhas in the world

There are many headless Buddha in these ruins – no one is sure how this head wound up as part of this tree.

We ended the day by taking a boat back to Bangkok. It was interesting to see the various buildings go by – from temples to modern skyscrapers to small houses and even the Grand Palace. Though I think the most exciting part was when we barely cleared a low bridge and everyone had to hit the deck:

Most buildings have ornate little altars out front. They are always covered with fresh flowers and often have drinks (with straws) and small dishes of food in them.  It turns out these are designed to appeal to spirits. Some spirits are mischievous, so giving them a nice place to stay deters them from causing trouble in the home or business. I find this approach to problem-solving very charming… rather than trying to get rid of the spirits, they make them feel very welcome somewhere else.

Now we are off to a smaller, coastal town to take in the quieter side of Thailand before we head to Vietnam. Though we will be bouncing in and out of Bangkok a couple more times since its such a central transit hub, so I think I am destined to keep humming “One Night in Bangkok” for a couple more weeks.

4 thoughts on “One Night in Bangkok (And Then Some)”