Its been a few years since I’ve lived with a dog.  First and foremost, I am reminded of how low-maintance cats are. 🙂

Roxy is a young Australian cattle dog mix.  She’s very sweet and also very energetic. Unfortunately, there are few places in Singapore where dogs can be off-leash (and I’m not about to break any rules in Singapore). I think she would love a place to run and play with other dogs, but there just aren’t any nearby.

I suspect this is partially because many adults are afraid of dogs… Roxy is not very big and her tail is always wagging, but adults will look visibly nervous, cower, and even cross the street when they see us on a walk. One day, I encountered a woman walking a schnauzer. The dogs seemed interested in each othr, but when Roxy went over to say hello, the girl quickly jumped away and told me she was scared of dogs… despite actively walking one! So bizarre!

The other thing that could be throwing everyone off is that I’m white. Singapore expat familiess often have “helpers” – these are live-in help, women usually from the Phillipines or Sri Lanka, who take care of the pets, cooking, cleaning, shopping, childcare, etc. Based on what I’ve seen, they are the only ones taking the dogs for walks.

The helper industry is an interesting one. It is heavily regulated by the government, ensuring that helpers get one day a week off (typically Sunday) or compensated for working extra.  This is why the lavish champagne brunches happen on Sundays, and hotels often have a room where people can leave their children while they eat. The helper’s employer must provide health care, all food & accommodation, airfare for a yearly trip home, plus an annual bonus. The helpers seem to get paid somewhere around $500-$700/month, and then the employer must pay the government an additional $200/month.

The helper’s quarters seem awfully small and I’m sure the hours are long, but based on what people have told me, many of them support their entire extended families on what they earn. And the goverment oversight helps ensure people don’t get taken advantage of (hopefully).

I find it all fascinating.  (And obviously, this family doesn’t have a helper or they wouldn’t need us to pet sit.) I tried to be friendly to the girls I saw walking other dogs, and while they would return a smile or “hello”, I also got the sense they weren’t sure what to make of me.

It was nice to see what it could be like to live in Singapore (albeit a 5 bedroom house with a private pool is probably not in the cards for us). The metro is fast and cheap and easy to use, and there are enough opportunities for Zumba classes.  However, diets are so different here that many of my staples (decent cheese, hummus) are difficult to find, plus wine/alchohol is super expensive as the government taxes it heavily. That said, there’s plenty of places to get good (and cheap) Asian and Indian food. We both agree that we could certainly live here if the right opportunity presented itself, though the humidity would take some getting used to. (After 3 weeks there, it still seemed overwhelming every time we stepped out of the house.)

Singapore is home to the best zoo in the world (at least I think so).  Last time I was there I was blown away by how few cages they have.  I really think this can only happen because people never break the rules – in the US, so many of the barriers are necessary to protect the animals from people, more than the people from the animals.

They have a part of the zoo that is only open at night, appropriately named the Night Safari.  Its much smaller than the main zoo, but a really unique experience since its mainly nocturnal animals.  They have a free tram that runs through part of the park, and then walking paths which cover the rest of it.

Its a great chance to see different kinds of animals, and they have tried their best to minimize cages wherever possible. While sometimes it was hard to spot the animals in the dark, other times they were incredibly close… you felt the rush of air on your face as the free-range bats flew past you, and the tram went through several open areas for antelope and other hoofstock who were close enough to touch if you just reached your arm out (which no one did since they repeatedly reminded you to not touch the wildlife, and no one breaks the rules here because punishments are severe).

These rules afe strictly followed in the metro…

They don’t beat around the bush with the language.

There were many kinds of animals I’ve never seen before, or even heard of.  They had a pangolin (a critically endangered mammal that looks like it’s related to an armadillo), binturongs (a “bear cat” which they said smelled like popcorn, but I think popcorn smells good and this animal certainly does not), slow loris (who are not slow at all), markhors (the world’s largest wild goat), and sloth bear (who also surprisingly active, given their name).And there were plenty of big cats, who were much more active at night.

Taking photos was a challenge due to the low light, but it was also good to just enjoy the animals without messing with your phone. Howeever, I did get one good one:

Singapore is home to many Michelin-rated restaurants and celebrity chefs.  My current (lack of) paycheck doesn’t support an excessive amount of those indulgences, but we have found that we prefer to be conservative on accommodation costs in favour of eating well.

I couldn’t resist going to the Tippling Club. Its a molecular gastronomy dining experience, and I’m happy to report it did not disappoint – from the scented cocktail menu to the gorgeously plated, creative cuisine. One highlight was a tomato, basil and olive oil “lava lamp” – presented as a soup shot, the basil slowly bubbled to the top just like the name suggeted.  It was all so fun!  We sat at the counter and watched the open kitchen and also had a pleasant chat with the chef.  I highly recommend it.

Surprisngly, not poop! Charred peppers with a miso sauce 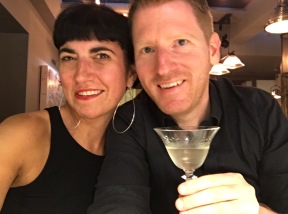 This martini had 4 different flavours, depending on which side of the glass you sipped from 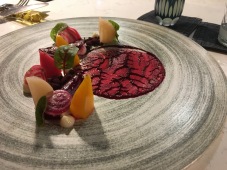 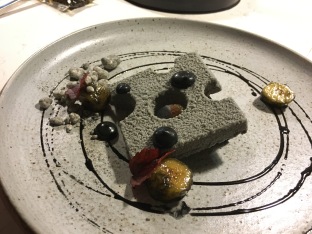 Singapore is said to be “a city in a garden, not a garden in a city”… the humidity and regular rainfall means everything is naturally very lush. But nature doesn’t get all of the credit – Prime Minister Lee Kwan Yu in the early 60s outlined a vision to “transform Singapore into a city with abundant lush greenery and a clean environment in order to make life more pleasant for the people” (and presumably encourage tourism and foreign investment). Elaborate landscaping is evident everywhere – even the plants in the medians are well-considered and cared for.

Gardens By The Bay is one of many examples of the government’s committment to engaging people about the environment and greening the city. The 250 acre park only opened in 2011. The highlights are the two glass conservatories which give you a very surreal impression of being on another planet. They are pleasantly cool on the inside, contain plants and flowers from all over the world, and have no interior columns so you have clear views of both the plants inside and the tall buildings of Singapore outside.

Both conservatories were designed to have a minimal footprint on the environment – rainwater is collected from the buildings and sent to the cooling system, which is powered by the Supertrees in the middle of the park. These tree-like structures are vertical gardens with a massive array of solar cells. The solar energy is used to power most of the park.

Its a gorgeous display of plants and a strong message about the environment and conservation. Even if you don’t usually get excited about flowers, it’s still worth a visit. 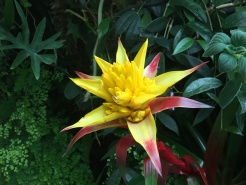 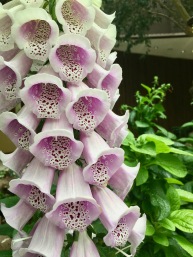 We were already intrigued by the unusual lotus flower-inspired building that is the ArtScience Museum at Marina Bay Sands.  Once we saw a poster for an exhibit called “Future World: Where Art Meets Science”, we figured we had to go. 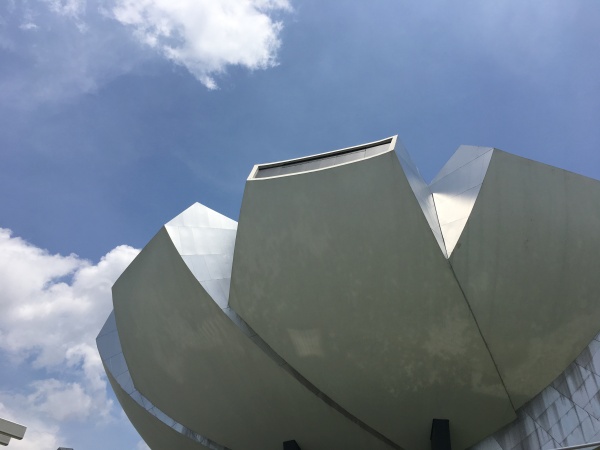 The Future World exhibit wasn’t quite what we had hoped for… it looked like it would be a bunch of cool, immersive, interactive art.  However, a lot of the exhibits lacked the polish and performance we’ve come to expect from technology.  Children seemed highly engaged, though, and the ideas behind a lot of the pieces were interesting even if the execution could be improved.

The final piece, which was a LED-filled room intended to make you feel immersed in the cosmos, was particularly fantastic and made up for any disappointment in some of the other pieces.

Lucky for us, there was also a MC Escher retrospective.  It was fascinating to see how his work evolved into the impossible scenes he is reknowned for.  The gallery did a great job with the installations and added their own interactive elements to it: 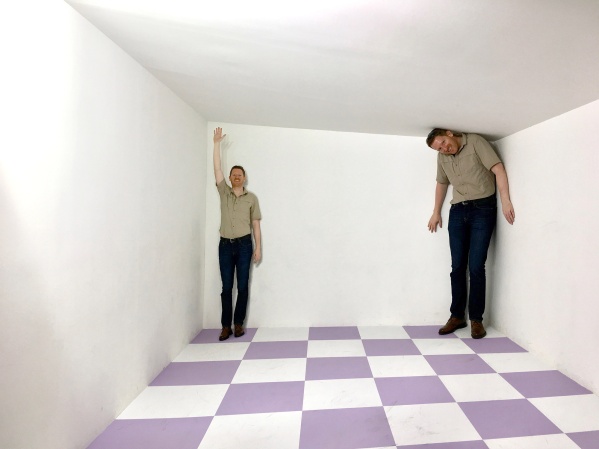 Sriram & Tanya decided we were missing some quintessential Singapore experiences, so we headed to Din Tai Fung to eat our weight in dumplings.  They are quite a famous chain and I can see why – the dumplings and steamed buns were all excellent! There is an army of highly trained chefs making them to order, and surprising amount of vegetarian options. 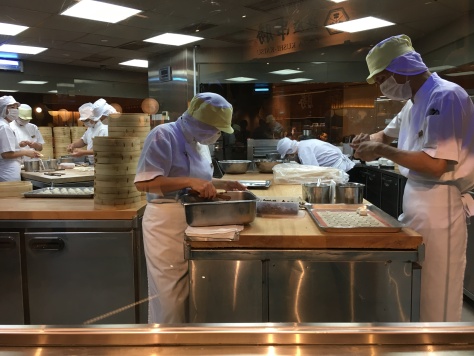 We then headed to Chinatown, which recently has become a destination for hipster cocktail bars.  One place required a password to enter, then you had to find the door in a mirrored box in order to get through to the bar area.  Another had really creative tea-infused cocktails in a laundry-themed environment. It was fun to explore the city and nice to feel like we were having a normal Friday night out with friends.

I had seen promotions for a “platinum movie experience” so we decided to check it out. It is comparable to the difference between First Class and Economy on a flight.

You have a special place to collect your tickets, and a pre-show lounge that looks similar to a business class lounge in an airport (minus the free champagne, unfortunately).

The seats were ridiculously enourmous, reclined almost flat, and came with cozy blankets. And there was a promo running to get free snacks, so all said and done, it didn’t wind up being that expensive.

The food & drink wasn’t nearly as good as somewhere like the Alamo Drafthouse, but it was still a fun twist on a movie outing. And the theatre only had 32 seats in it, so we never had to deal with crowds or people talking or someone kicking your chair.

So now we are headed to Malaysia.  We are planning to spend the next 6-8 weeks exploring SouthEast Asia. I’ve never had a strong pull to any of those countries, so I’m going in with little information and no preconceived notions about what it will be like… I know it will be cheap, warm, and food will be good but cheese will probably be in short supply.

Let me know if you have any recommendations!

One thought on “Singapore: Part 2”