It was so great to finally be in warm weather! I love being able to walk around in a sun dress without bringing a jacket. (Though I did spend the first couple evenings carrying a pashmina unnecessarily, just in case… SF habits are hard to break.)

Spain feels like a bargain compared to London and the Nordics. Most restaurants don’t bother with selling wine by the glass – you either get a carafe or a bottle, which seems sensible to me! And every place has a selection of half-bottles, too, so I could have cava and The German could sample the reds, each for the price of a glass of wine in London.

Our AirBnB turned out to be a bit of a disappointment… suffice to say it was old and dingy and could have used a woman’s touch. The shower was tiny and awkwardly-shaped. (Each time one of us was showering you could hear a lot of: *thud* “ow!” as we knocked into the shower handles or this random protrusion in the wall.) There was a flock of pigeons living right outside the kitchen window – we actually found feathers on the counter one day. And the bedroom was small with no windows, so between the heat and rattling fan it was hard to sleep.

One of the highlights was that it was on the top floor of the building… with no elevator. Initially we were excited about the built-in exercise of having to climb 6 stories of stairs a couple times a day – this would surely help offset all the tapas and cava! However, each time we’d arrive at the top of the stairs huffing and puffing and needing a shower, and getting the luggage up and down was quite a feat, so not exactly the joyful workout we envisioned.

The neighbourhood (Sant Antoni) was great, though – very walkable to almost everywhere with lots of cafes and shops right outside the front door. We spent many days exploring all the Gaudi highlights and then nights eating tapas and drinking cava.

Even the Casa Batllo stairs are beautiful

Detail of the interior light well in Casa Batllo 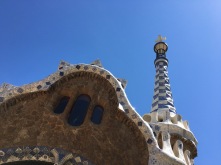 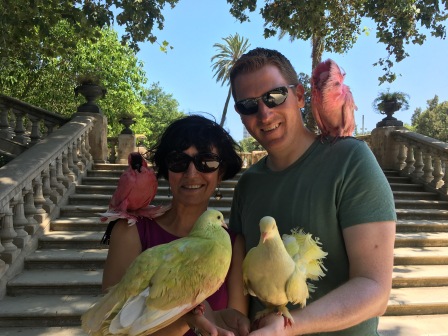 That said, we didn’t have the same love affair with tapas that so many of our friends did… We went to 4 differenthighly recommended places, and were far from blown away. As a vegetarian, I was pretty much just eating patatas bravas and a plate of mushrooms and asparagus (which were sometimes good, but got old quickly). Somehow the specials of the day were mostly sold out, even though we were eating on the early side (by Spanish standards, which means 7:30 or 8.) The German had plenty of meat or seafood choices, but often wound up with things that were breaded & fried when he was hoping for otherwise. And the pan con tomate was always so bland – where was the garlic?

I did have one dish that I loved, which was a fried egg smashed into skinny fries and covered with garlic aoili and bravas sauce. (This would be the perfect hangover food – someone in SF should get on that.) And the super-thick style of hot chocolate is fantastic even when its so warm outside. So it wasn’t all bad.

La Sagrada Familia was definitely one of the highlights of our visit – its impossible not to be in awe of it. (Even The German had to agree and he’s generally not impressed by the churches we’ve seen, given where he grew up.) The stained glass is absolutely magnificent and casts such rich colours onto the sloping ceilings – its stunning. And by going up into one of the towers, we got an amazing view of Barcelona as well as the ability to see some detail of the roof that you can’t see from the ground. There are so many aspects of the building that I think are gorgeous – it really is a masterpiece. 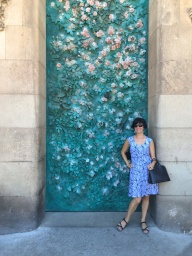 Even the doors are grogeous

This light is entirely from the stained glass

So much detail in every aspect…

A peek at some roof detail

Detail from one of the doors

Casting colours from the glass 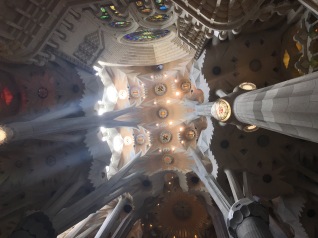 Before we went to Barcelona everyone kept telling us how its the best city ever… but between the humidity, our dumpy AirBnB, a frustrating failure of getting to Zumba classes (despite my best efforts) and generally not loving the food, we didn’t have that same reaction. The architecture is gorgeous and I like the pace of things, but I don’t think I could ever see myself living there.

Now its onwards to Germany!