We were excited to go visit some friends in Lapland because the sun never sets, Santa lives there, and we’ve heard its really beautiful.  I’m happy to report that all of these things are true.

The thing we didn’t know about Lapland is that its also the Mosquito Capital of the Universe. To be fair, every Finnish person who heard about our plans said “get mosquito repellent”, but what they should have said was “get a full body suit made of netting, every single mosquito-killing product you can find, and pants made of thick material”.

I have never seen so many mosquitos before (and I’ve been to Africa!). There are tons of them. And they never sleep.  As soon as you step outside, regardless of the time of day, they are all over you. You are constantly swatting to keep them out of your ears and mouth. So basically, everyone looks like this:

And yes, one time we actually wore those mosquito hats. We thought they were just trying to make us look silly, but these were absolutely necessary for one of the hikes:

So as you’re reading the rest of this post, keep in mind that every activity was preceeded by elaborate application of mosquito repellant, and anytime we were outside we were spastically flailing our arms around our heads…

Our friends Markus and Celine spend a lot of time in Lapland as Markus grew up there. His family has a really nice summer home on a large lake, and his parents still live in Lapland year-round.

Markus showed us all aspects of Lapland summer.  We started with a visit to Aavasaksa, which was an easy walk with a phenominal view:

Then we stopped by his Dad’s house.  His father was actually born on the property, so there’s a lot of history there. He’s constantly adding new things to the property, including this Sauna Boat: 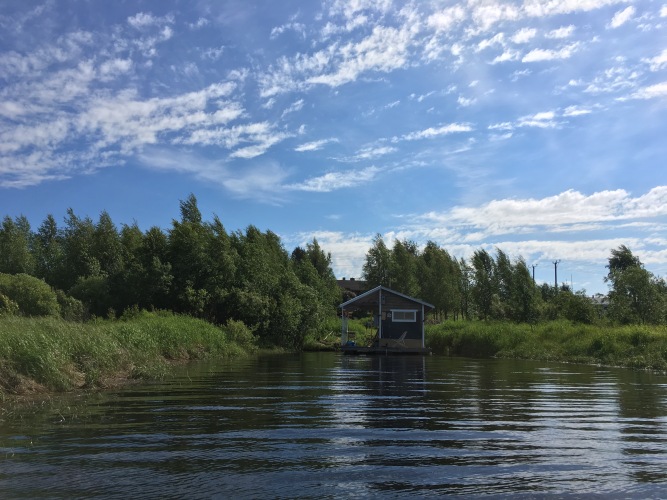 Apparantly, people didn’t want him building a sauna on the edge of the water as it would ruin the view. So instead, he put the sauna on a floating platform,  attached a motor to it, and called it a boat.

Markus has driven the sauna up and down the river before, but its a ridiculously small motor for such a large structure so we took out a rowboat instead. There are a lot of beautiful, secluded spots which are only accessible by boat. We were accompanied by his dad’s adorable dog, Teppsu:

You can tell she loves being on boats and being around people… she’s a very friendly, happy dog. (And they are lucky I didn’t try and steal her.)

We then took the over-stuffed VW Bug (3 adults, 1 child, our 2 suticases and 5 bags of groceries) to the summer house, which is on the edge of massive, clear lake:

where we commenced playing Mölkky, eating, drinking, and going in the sauna (of course):

The next day we decided to take a quick drive for a short hike  (where “quick” = 3 hours and “short” = 3 hours).  In Lapland, everything is really spread out, so spending 3 hours (one-way) to drive someplace is not a big deal.  And it doesn’t matter what time you go hiking because it never gets dark.

It was raining when we arrived at Pallas-Yllästunturi National Park.  Markus checked the weather and said it should clear up in about an hour. We were incredulous, but decided to have dinner at a lodge and see if the weather improved.

The food was great and they served a lot of traditional dishes.  It was a little twisted to watch the reindeer wandering around outside as The German ate reindeer stew, however, at least you know its free-range meat.

As predicted, the rain stopped right on schedule, and we set out for what was supposed to be an hour hike.  We started by hustling through a mosquito swamp, but then the trail quickly climbed higher to cooler tempartures (which means fewer mosquitos!) and we ultimately wound up in completely rocky terrain. If the rock had been red, it would have looked like Mars.

We soon realized this trail was going to take a lot longer than an hour, but at least we didn’t have to worry about it getting dark on us.

Their 5 year old daughter, Sanna,  had done an amazing job walking on her own, even when the terrain turned really rocky and the fog got really dense.  Markus had the brilliant foresight to bring some chocolate along, and told her she could have it if she made it to the point where the 1952 olympic torch was lit. Hence this victorious photo:

We all celebrated with chocolate, and then descended back to the car for the 3 hour drive home. We arrived back around 1:30am, which didn’t feel that late since it was still daylight outside.

The next day Celine suggested a BBQ at a scenic point that was much closer and a much shorter hike.  Markus warned that the first part would be like a “mosquito suicide run”, so we all put on the netted hats and made the best of it.

The top of the trail contained all the essentials for a Finnish BBQ – a fire pit, an axe for chopping wood, and a wine opener. Finnish people don’t mess around with charcoal when there’s plenty of firewood around:

They made a fantastic lunch over an open fire – mushrooms stuffed with cheese, sausages, and even fresh crepes. Clearly, we Americans have things to learn when it comes to grilling!

After that we had time for one more sauna before catching the train back to Helsinki.

All in all, it was a fantastic time (mosquitos notwithstanding). We usually only get to see Celine & Markus under really hectic circumstances, so it was really nice to see them at home and get to experience what life in Lapland is like.