We took a red-eye flight from Cape Town to Dubai. Emirates was easily the nicest economy flight I’ve had – the plane was clean and in very good condition, the in-seat entertainment system was remarkably easy to use and had an option for viewing exterior cameras (which I love), the food was decent, and the people were incredibly nice. The Emirates flight attendants are some of the few who still exude glamour to me… from the red lipstick to the well-tailored uniforms.

Despite all of that, a 9.5 overnight flight means we arrived feeling completely exhausted, even though it was only a 2 hour time change. Our first day was spent basically bumbling around and making mistakes.

We chose the slowest moving line at immigration – so much so that our luggage was sitting alone next to the empty conveyor when we finally got to it.

I got selected for a random luggage xray at customs, where they decided to go through all of my stuff to extract the water purifier I was carrying. (Its essentially a battery-powered UV light that makes tap water drinkable.) They started to confiscate it, and after I inquired why, it became clear that they had no idea what it was. Once I gave a small demo, they let me keep it.

We then went to get a taxi to our hotel, and through a confusing series of interactions wound up in a black car instead. I did try resisting but they assured me it was the same price as a regular taxi (which was a lie – it was triple the price). Sigh. Welcome to Dubai!

It really is hot as an oven here, and humid as well. And this is the mild season – in summer its usually around 113° every day. Hotels have to chill the pools to keep them at a swimmable temperature, and all of the bus stops are air-conditioned. Pretty much everyone minimizes their time outdoors until the sun sets, so we did what the locals do and went to the Dubai Mall.

This is the largest mall in the world (by size, not by number of stores).  It includes an aquarium, a waterfall, a cinema, an ice skating rink, 1200 stores and a bunch of restaurants, salons, etc. Just outside there’s a great view of the Burj Khalifa, and they also have some dancing fountains (like the ones at the Bellagio in Las Vegas, only much bigger – supposedly these are visible from space).

The top of the Burj Khalifa

(Part of) the waterfall

Pretty much every store you can think of from anywhere in the world is in this mall.  Its really interesting to see familiar brands translated into Arabic.

I’m fascinated by some of the women I see walking through the malls – they may be predominantly covered by burqas and hijabs, but their makeup was flawless and a number of them were wearing some pretty fierce stiletto heels.

Its apparant that going to the mall is a favourite pasttime here. While it was pretty empty during the day, by evening it quickly became crowded.

There were just as many men in white thawbs and women in black hijabs as there were people in western clothing.  All malls have prayer rooms in them and at the appointed time, all sound systems play the call to prayer… its very eerie to have all the various store soundtracks replaced with a single, unified chant.

We got to spend an evening with an old friend of The German’s (Hergen) who has been living here for 10 years.  It was very interesting to hear about life as an ex-pat… it sounds like no matter how long you’ve lived here, you will always be treated a little differently. His girlfriend has been here 12 years and loves the sun and the sea and the safety of Dubai.

They informed us about some of the cultural standards –  kissing in public can get you 3 months in jail, its best to dress more conservatively (essentially, make sure your shoulders and knees are covered), and people like cab drivers or waiters will always address the men first (“out of respect”, but I found it hard not to get annoyed by this).

Alchohol is incredibly expensive, and drinks are only for sale in hotels (presumably to placate non-Muslim tourists). There are only limited places where you can purchase bottles of alchohol, and those require a special license.  (It seems like everyone living here just brings in as much as possible from Duty Free when they travel, which is what we did.)

I really wanted to see the desert so The German found a great tour that included a camel ride and a falcon demonstration, followed by a bedouin-style dinner.  As it turned out, it all took place on a natural reserve that is owned by some of the royal family.  They have their own private zoo there. There is also some serious irrigation happening to they can have excessive amounts of trees around the area where their daughters stay, so the girls can feel free to wear whatever they want. Its a generous amount of land and they really aren’t there much, so they created a tour company to lead these events on part of their property.

The drive to the desert took about 45 minutes.  Along the way our guide pointed out some very nice villas – 3 or 4 bedroom homes with manicured yards.  If you are local and marry a local, the government gives you one of those villas plus about $40,000 as a wedding gift. And while its fine for men to have more than one wife, they must all be treated equally.  So if he wants to give a Ferrari to one of his wives, he must give a Ferrari to all of them. (I think our tour guide was obsessed with cars – all of his examples were car-related.)

Once at the desert, they covered our heads to protect us from the sun and then we were ready for our 45 minute camel ride!  The camels seemed very relaxed the entire time, though we were told we needed to move quickly when it was time to get on or off of them. It’s quite a dramatic rise when they go from kneeling to standing and I have a new appreciation for just how tall they are!  Their gait is certainly not as smooth as a horse’s, but it was a pleasant ride with great views of the sand dunes and we saw a number of wild sand gazelle.

We had a great view of the sunset as they brought out one of the royal falcons.  They are actually faster than cheetah when they fly, and it was surprisingly interesting to hear about how the bedouin used to rely heavily on them to assist with their hunting. Hunting with falcons is no longer permitted in the UAE, so when the royal family wants to train their falcons, they fly them to South Africa… in their own first class seat on the plane, of course.

Finally, we went to a bedouin-style camp for dinner.  It felt like the right mix of authentic with modern… They welcomed us with rose water for washing our hands and arabic coffee, plus there was spiced chai to drink, a shisha smoking area, and someone giving henna tattoos (which I don’t think was really originally bedouin, but still fun).  They had very moden bathrooms, placed discreetly around the corner so as not to ruin the atmosphere.  Dinner was served in extermely hot covered areas. It started with traditional lentil soup, which was the standard Bedoiuin meal.  Then there was an appetizer course of hummos, salads, etc. before they moved onto roast meats, including camel. (Thankfully, not the ones we rode over.)

There were a few traditional dance performances throughout the night, excessive amounts of food, and I loved getting henna on my hand (which was something I used to do regularly with my bellydancing troupemates). We arrived back at the hotel sweaty and covered with sand – so it was pretty much everything I hoped for in a desert experience! If you’re ever in Dubai, I highly recommend it.

I finally managed to secure a pet-sitting gig through Trusted Housesitters!  The house was large and very comfortable, plus I got to hang out with 2 cats and a kitten.  The kitten was particularly adorable, and we had a lot of fun playing with him. I definitely miss having cats, and once we pick a place to live I know it won’t be long before we acquire a furry housemate. 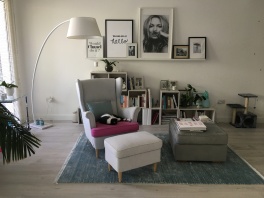 Ziggy in his favourite chair

Teddy, impatiently waiting for my breakfast

Kitty, stuck in a cat trap

Teddy, who is certainly not supposed to be in that plant

We spent an afternoon at the “world’s largest theme mall”, named after Ibn Buttata, who was a 21 year old explorer. The mall is themed according to the places he visited, like Persia, Egypt, India and China. It was pretty reminiscent of Caesar’s Palace in Las Vegas – modern stores in aciently themed environments. A little strange, but more interesting than your average mall in the US.

Hergen took us on a whirlwind tour of Old Dubai, which included the Gold Souk.  I found it overwhelming even though I suspect it wasn’t a very crowded day… Every person was either beckoning you into their shop, or trying to sell you counterfeit Rolex or Louis Vitton handbags, or a pashmina, or saffron.  Having everyone shouting to you constantly was just too much for me (even though I did need a purse). We hustled it out of there without even buying any ridiculously large gold necklaces, which were in every other shop window.

Next up was our fourth (and final) mall of the trip, Mall of the Emirates, which is home to Ski Dubai. The German had never been skiing, so now he can say he learned in the desert!

They run a pretty impressive operation – its real snow and the temperature stays at -3° (26°F). They provide everything you need – skis, clothing, even socks – and can get you outfitted with gear and into the snow pretty quickly.

Realistically, its just 2 runs but they are a decent length and steep enough to be fun, at least for an hour or so (at which point you’re plenty cold anyways). In addition to skiing, there is a also a small chalet at the top of the (very slow) chair lift, a zip-line over the slopes, several short sledding hills, a luge, a children’s play area, a place for penguin encounters, and a short Zorb slope (which is basically rolling down a hill in a giant inflatable ball). All in all, we had a great time and it was absolutely ludicrous to think it was 100° outside.

On our final night, we had dinner with a former colleague, Amy. We laughed about how we hadn’t seen her in years despite all of us living in the Bay Area, but here we were having dinner in Dubai. Our meal was fantastic and the conversation was even better. Amy kindly agreed to mail in my voter registration  so it will hopefully make it in time. (I’ll spare you the rant, but figuring out what to do as American overseas with no predictable address wasn’t easy.)

Dubai is a fascinating place and I’m glad we came. There’s a lot I like about it – the ability to go swimming every day; the cheap and easy-to-use metro; the many “ladies only” places, from metro cars to salons to gyms – but I’m feeling ready to move on.

Next up, we are headed to Singapore!.