Spending the second half of our visit in the Sea Point area of Cape Town was definitely a good call. The apartment is much more comfortable, its great to have a view of the ocean, and it feels a lot safer. (Even though all the houses have electrical fencing, security cameras, and spikes.) 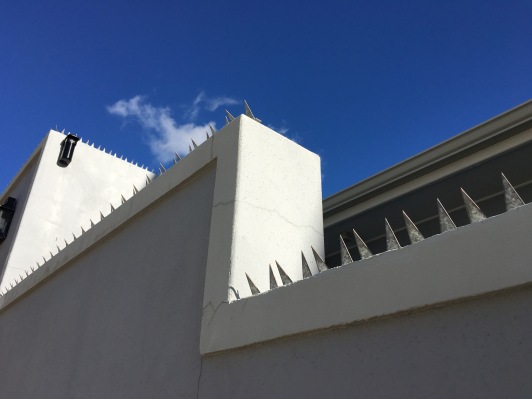 We got together for dinner with a woman we met on the wine tour.  She’s a well-travelled Australian who also works in technology. It was interesting to hear her perspective on being a women in a male-dominated industry – a very familiar conversation, unfortunately, though I had hoped that the UK or Australia might be a little different. Regardless, it was nice to have a conversation that went deeper than travel stories. And the restaurant was also quite charming:

With only a week left, it was time to power through some tourist activities!

Against my better judgement, we decided to hike up Table Mountain (instead of taking the ariel tram). It was a gorgeous, clear day so we stupidly left around noon to start climbing over rocks in what turned out to be a predomintatly shade-free trail.

In places where its particularly likely you might fall off the mountain, they have thoughtfully added a barbed wire railing. So if you don’t slip to your death, you’ll still walk away bleeding.

We made it to the top 2.5 hours later, after a lot of sweating and swearing. It was tougher than we anticipated (though certainly easier than Kilimanjaro) and we were rewarded with incredible views, plus an easy ride down in the tram.

Yes, I hiked in sandals.

Not a bad view of Cape Town

The next day we booked a tour to see the Cape of Good Hope and the penguin colony that lives at Boulders Beach. Our guide was originally from the Democratic Republic of Congo and spoke at least 7 languages, knew an incredible amount of history, and told us fascinating stories while also driving a large van through narrow streets. I continue to be impressed by everyone’s depth of knowledge and breadth of skills.

As we went past a large intersection just outside of town, we noticed a bunch of people hanging around, hoping to pick up work. Some had signs like “childcare” or “housework”, while others were looking for any kind of manual labour. The unemployment rate in South Africa is 26%  (compared to around 5% in the USA). He told us about Nelson Mandela’s observation that South Africa used to have way more prisons than schools. Thanks to him, those numbers have been reversed. Cape Town is so modern, but you can still see the development happening.

But I digress – the stops along the tour were gorgeous, including Camps Bay beach, playful seals at Houts Bay, and the Cape of Good Hope. And of course, I loved seeing the wild penguins at Boulders Beach (even though it was exasperating negotiating our way through the large groups of tourists, jockeying for a good photo position). 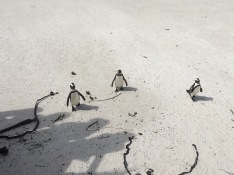 Loved watching them waddle along the beach!

The gorgeous Camps Bay beach… pity the water is always too cold for swimming.

One custom I really like here is that people say “pleasure” instead of “you’re welcome”. So when someone brings me a coffee in a cafe, I say “thank you” and their response is “pleasure”.  It’s a nice sentiment, and I’m going to try and work this into my regular vocabulary.

With few exceptions, everyone has been incredibly friendly and very open. As I’ve mentioned, the Zumba community has been beyond amazing, but we’ve also had very  interesting chats with Uber drivers, restaurant staff, shop clerks, and bartenders…

… especially the guys at Outrage of Modesty, which was a Cape Town highlight.  Its a tiny little cocktail bar with a staff of 4 friendly and enthusiastic bartender/chefs. They make incredibly creative cocktails out of fresh, local ingredients and will pair them with inventive snacks.

They identify the drink by flavour profile, not spirit or specific ingredients.  I loved this as I wound up drinking (and enjoying) a number of things that I never would have normally ordered. The drinks and snacks incorporate local ingredients, foams, purees, artisan ice cubes, flames, dry ice, custom infusions and a lot of passion. We loved the whole experience, from the secretive location to the friendly staff, and of course the food and drinks.

And before we left Cape Town, I also got a much-needed haircut, took a bunch more Zumba classes, did some shopping, and enjoyed several lovely dinners.

As we are leaving Africa, I’m feeling incredibly grateful for my situation… because I’ve never been a refugee or an orphan, because I can move (relatively) freely from country to country around the world, and because I come from a place with high-value currency. I’m rarely exposed to people with those experiences in the US, but here it happens daily.

I had hoped that coming to Africa would help reset some of my habits and remind me of what’s important. I think it’s done that: I’ve got far fewer physical possessions, I’m much more physically active, and my interactions with kind strangers have been the most valuable part of our time here. (And I also have a newfound appreciation for a decent internet connection.)

While traveling through Africa is not always easy, it’s always worthwhile. I hope I’ll be back again soon.

And now for something completely different, we are headed to Dubai…

4 thoughts on “Wrapping Up Africa”